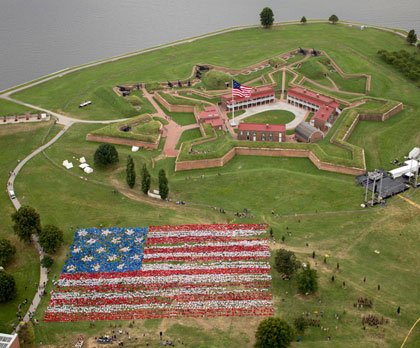 BALTIMORE — In a spectacular show of red, white and blue on Tuesday, September 9, 2014, at Fort McHenry National Monument and Historic Shrine, more than 6,600 Maryland students, teachers and chaperones created the largest 15 stars and 15 stripes Star-Spangled Banner Living Flag ever assembled.

The enormous undertaking was a cooperative effort between the National Park Service and the Friends of Fort McHenry as part of the 200th anniversary celebration of The Star-Spangled Banner, our National Anthem. The event was webcast live on YouTube, and

students from around the country participated in the festivities via a live distance learning event, which is now available for on-demand viewing at www.starspangledbannerlivingflag.org.

The morning started with a star-spangled education program that included interviews with historic personalities, a special “Wheel of Fortress” trivia game, special films, music and more. Afterward, they began the nearly 90-minute task of forming the living flag, which was completed at 12 p.m.

“It was breathtaking to witness these students and their teachers become part of history of Fort McHenry while learning about two of our nation’s greatest symbols of freedom and democracy— the American flag and the National Anthem,” said Tina Cappetta, superintendent of Fort McHenry National Monument and Historic Shrine.

The Star-Spangled Banner Living Flag was a legacy from the centennial celebration, when Fort McHenry saw the creation of the great “Human Flag of 1914.” Today’s event included Myrtle Sanders, who was part of the 1914 flag as a three-month-old infant, as well as several descendants of participants from 1914.

Fort McHenry’s Star-Spangled Banner Living Flag is one of a weeklong series of events celebrating the 200th anniversary of our National Anthem. and the Maryland War of 1812 Bicentennial Commission.

For additional information on these and other events, visit www.starspangled200.com