Promises Kept: Raising black boys to succeed in school and in life 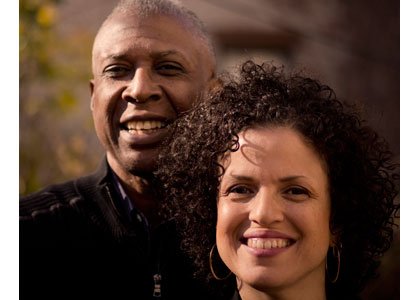 As part of the OSI Baltimore Series "Talking About Race," filmmakers Joe Brewster and Michele Stephenson of the award-winning 2013 documentary, “American Promise” and authors of a follow-up book “Promises Kept: Raising Black Boys to Succeed in School and in Life,” will discuss the challenges and best practices for raising African-American boys in a society that too often discriminates against them on Monday, September 15, 2014, at the Enoch Pratt Free Library in the Wheeler Auditorium at 400 Cathedral Street in Baltimore. (Photo: Ayana Enomoto Hurst)

The shooting death of Ferguson, Missouri’s Michael Brown, an unarmed black teenager, has raised the national consciousness about issues of race, class and implicit bias.

Michele Stephenson and Joe Brewster— authors of the award-winning 2013 documentary, “American Promise”— know something about those issues. They stood squarely in the middle of them when their own son entered a prestigious, private school in New York City. Exploring his experiences over 12 years became the basis of their eye-opening documentary, which earned rave reviews from critics.

In a new book, “Promises Kept: Raising Black Boys to Succeed in School and in Life,” Stephenson and Brewster continue the important and emotion-filled conversation they started in American Promise— with the hopes of ensuring that far fewer black boys end up the way Michael Brown did.

Despite having middle-class, college-educated parents, Stephenson and Brewster's son, Idris, and his childhood friend, Seun, struggled in school. While filming their documentary, the couple endeavored to find reasons for the boys' achievement gaps, and along the way, found some practical advice that all parents of black children— but especially boys— can use. They turned that advice into their new book.

A review of the book on PBS' website says this: "Where American Promise raises provocative questions, Promises Kept delivers answers, combining insights Brewster and Stephenson derived from their own experiences with the latest research on closing the black male achievement gap, providing readers with an unprecedented toolkit full of practical strategies from infancy through the teenaged years."

The book's topic is critical, because across the country, boys and young men of color are disproportionately at risk. Systemic racism and implicit bias contribute to the problem, making it so black boys are more likely than their white peers to be unable to read proficiently, to drop out of school or to become involved in the criminal justice system. Sadly— from Brown to Trayvon Martin, to John Crawford III or Jonathan Ferrell— they also are even more likely to be killed.

In Promises Kept, the authors explain how we all can help prevent such tragedies from happening, beginning first at home and in the community. Chapters in the book include such topics as:

*How to influence a boy's brain before he's even born.

*How to tell the difference between

authoritarian and authoritative discipline— and why it matters.

*How to create an educational program that matches the boy's needs.

*How to prepare him for explicit and implicit racism in school and in the wider world.

*How to help the young man develop resilience, self-discipline, emotional

intelligence and a positive outlook that will last a lifetime.