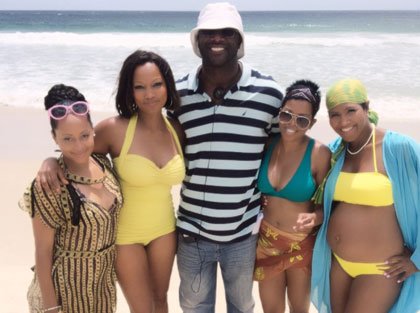 What do you get when you put four of Hollywood’s finest African American female stars together in one film?

Shot entirely in Trinidad and Tobago, producers wrapped up filming in June this year.

“The show is about four friends who take a trip to the Caribbean to celebrate two of their friends’ birthdays. One thing leads to another and they get into a bit of trouble,” said director Roger Bobb, the London-born producer of, “The Rickey Smiley Show.” “They all lose their passports and money and end up owing a guy $10,000.”

All of which leads to a Sherlock Holmes-type mystery, Mission Impossible-like danger and a whole lot of fun for audiences who will get an opportunity to see the film on TV One, perhaps by the end of the summer.

“The film is the first African American female buddy action comedy, Bobb said. “It’s about four college friends who go on a female bonding trip to Trinidad. While they are there they experience fun, adventure, romance and danger.”

Bobb has previously served as co-producer on many of the “Madea” films, including, “Madea Goes to Jail,” “Meet the Browns,” and “Madea’s Family Reunion.”

“Hands down, this is the best experience in film making I’ve ever had,” said Vaughn, whose credits include, “The Steve Harvey Show,” “Soul Food,” and “Daddy’s Little Girls.”

“The genuine love, support and respect we shared on screen and off are unmatched to any film project I’ve been a part of,” said Vaughn, who’s expecting her third child. “We all had a ball and enjoyed an authentic bond that was rather healing for each of us. No egos. Whether we knew it or not, we needed this experience and God made it so.”

Bobb said the concept for the film came together after Vaughn and the film’s executive producer and writer, Cas Sigers, presented him a script not long ago.

“I was able to secure financing and a chance meeting with the head of the Trinidad and Tobago film commission convinced me to shoot in Trinidad,” he said.

Atkins, a New York City native, got her start on “The Cosby Show,” and has appeared in shows like, “Family Matters,” “The Wayans Brothers,” “The Parent ‘Hood,” and, “Moesha.”

Williams also started on the “Cosby Show,” and is well known for her roles in such television shows and movies as, “Miami Vice,” “Roc,” “A Thin Line between Love and Hate,” “The District,” and “Soul Food.”

Named as one of the top 40 executives under 40 by the Network Journal Magazine, Bobb currently has three hit shows on the air and he’s released 11 films over the past six years, each having opened No.1 or No. 2 at the box office.

Bobb served as the supervising producer of, “House of Payne,” which premiered on TBS as the highest rated first run sitcom in basic cable history. The show has taped over 254 episodes, which is more than any other African American sitcom in television history.

“Getting the cast [for ‘Grown Girls Getaway’] was the easiest part,” Bobb said. “I had worked with all the actresses before except Garcelle and they already knew each other so the chemistry was already there.”