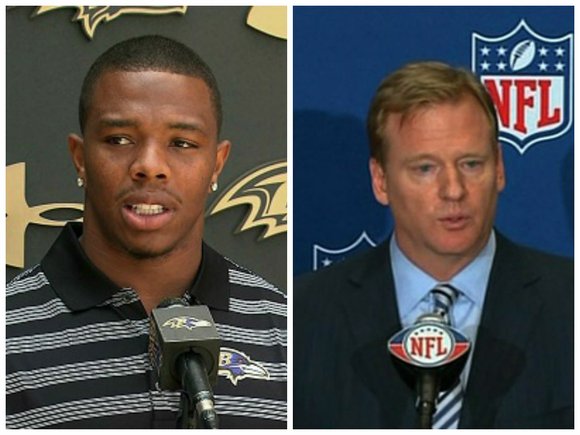 (Left)Ray Rice, the Baltimore Ravens running back suspended by the NFL for two games after video showed him dragging his then-fiancée (now his wife) from an elevator, told reporters on Thursday, July 31, 2014 his actions were "inexcusable." (Right) NFL Commissioner Roger Goodell speaks at a July 21, 2011 press conference regarding a player lockout. CNN

WASHINGTON (CNN) — The growing outcry over how the NFL and Commissioner Roger Goodell deal with incidents of domestic violence has reached the nation's highest office. Even President Barack Obama has seen the footage of Baltimore Ravens running back Ray Rice punching his then-fiancee.

"The President was shocked by what he saw. Let's put it that way," White House Chief of Staff Denis McDonough said told NBC's "Meet the Press" on Sunday.

The incident involving Rice is one of several high-profile scandals involving NFL players that have spurred complaints that the National Football League is too lenient on players.

Last week, the White House addressed the suspension with a statement saying the President believes domestic violence "contemptible and unacceptable in a civilized society," but it wasn't clear whether he had seen the video of the incident from inside the elevator.

McDonough said the White House wouldn't at this point try to characterize how the NFL is handling the Rice case. But he did speak generally about Rice's indefinite suspension.

"We all know that Ray Rice being suspended indefinitely seems to be exactly the right thing," McDonough said.

Other lawmakers Sunday were far more critical of Goodell and the league.

"I have a feeling there's a lot of people that know stuff, what went on here," Democratic Sen. Amy Klobuchar of Minnesota told CNN's "State of the Union."

"I'm waiting to see if there is a major cover-up, if it shows [Goodell] lies, there could be many factual situations where, in fact, he should step down."

Klobuchar, a former prosecutor, is one of 16 female senators who sent a letter to Goodell calling on the football league to institute a "real zero-tolerance policy" in such cases.

The NFL announced late Wednesday that former FBI Director Robert Mueller will lead an independent inquiry into the league's investigation and how it gathered evidence in the case.

"Bob Mueller's integrity is on the line here, and hopefully he'll get the facts out," Klobuchar said of the investigation. "The fact that (the NFL) gave only a two-game suspension and then turn around and after the evidence goes public say, 'Oh, oh, we made a mistake. Now we're going to let him go.' I think that's problematic for the NFL and deeply concerning about how they handle these kinds of cases."

Sen. Kirsten Gillibrand of New York, who also signed the letter to Goodell, had scathing words for the NFL.

"I think the way the NFL handled this was awful. It was outrageous," Gillibrand told CBS's "Face the Nation." "They had all the facts they needed. They had a player who admitted to beating his wife. They had video of him dragging her out an elevator. There was nothing left to determine. That player should've been fired immediately. So we are now looking to the commissioner to enforce a zero-tolerance policy."