Robin Thicke's blurred life: 'I was high and drunk' all last year

Marvin Gaye's family accuses Thicke, others of ripping off a 1977 Gaye hit 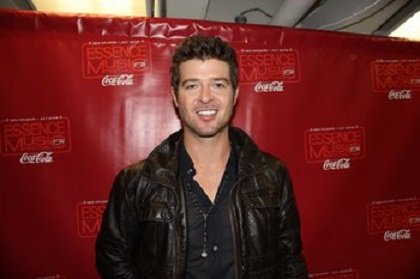 LOS ANGELES (CNN) — Summer 2013 was blurry for Robin Thicke, according to what the "Blurred Lines" singer told lawyers in April.

"Every day I woke up, I would take a Vicodin to start the day and then I would fill up a water bottle with vodka and drink it before and during my interviews," Thicke said in a deposition transcript made public Monday.

Being high and drunk appears to be Thicke's defense in a high-stakes lawsuit filed by Marvin Gaye's family against Thicke, producer Pharrell Williams and hip-hop artist "T.I." Clifford Harris Jr.

The lawsuit filed last fall contends Thicke's "Blurred Lines" is an illegal rip-off of Gaye's "Got to Give It Up."

"It is a musical impossibility," he said in in the April 23, 2014 deposition. "They're two complete different syncopations and note choices and different keys. One's a minor key and one's a major key."

Musicologist Judith Finell, an expert hired by the Gaye family lawyers, said she identified a "constellation of at least eight substantially similar compositional features between the two works. ... The signature phrase, vocal hook, backup vocal hook, their variations, and the keyboard and bass lines" are substantially similar and they share "departures from convention such as the unusual cowbell instrumentation, omission of guitar and use of male falsetto," she said.

If it was stolen, Thicke was too high and drunk to do it, his testimony suggested. "I was high on Vicodin and alcohol when I showed up at the studio," Thicke said.

"I walked in and he [Pharrell Williams] started singing me some ideas he had and the song happened very quickly," he said. "I jumped right into the booth and started singing whatever he said."

Thicke does claim creation of the melody and four-part harmonies in the second verse, but otherwise Pharrell Williams "geniused the whole thing."

"Pharrell and I were in the studio making a couple records, and then on the third day, I told him I wanted to do something kinda like Marvin Gaye's 'Got To Give It Up,' that kind of feel 'cause it's one of my favorite songs of all time," Thicke told Billboard Magazine for a story published in July. "So he started messing with some drums and then he started going 'hey, hey, hey' and about an hour and a half later we had the whole record finished."

Thicke now says he was lying to interviewers, partly blaming drugs and alcohol.

"With all due respect, I was high and drunk every time I did an interview last year," he said in the deposition. "So there are some quotes I don't remember saying, but I do generally remember trying to sell the public on the fact that 'Blurred Lines' was my idea in some way."