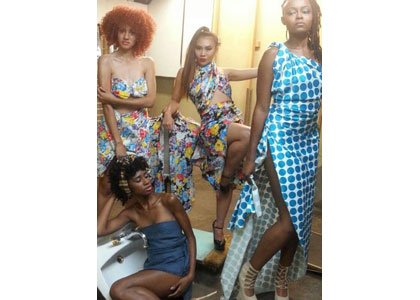 Fashion designer Stephen Wise is not new to the game of owning a business.

He shared that he has been down this path before. He once owned a business but was not focused. “I was my own worst enemy. I did not think I could be successful. I would set a goal and then when I achieved that goal, I wasn’t ready for the next step. This time it’s all business, being older and wiser I get it now.”

“Steve Harvey was one of my biggest customers. I made him a shirt out of some old fabric [and] he loved it. Paid me in cash, picked up the shirt later that day. He is a big supporter of local minority owned businesses. Even with that experience, I still didn’t understand that I had a gift to share. I did not take it seriously,” said Wise.

Stephen Wise can tell you all about fabric. He knows the history of the fashion game, especially black designers and he wants Baltimore, the city where he was born and raised, to become a fashion destination. He plans on opening a store and calling it Stephen Wise Baltimore because he says, “If you study fashion or design you would notice that the big name players in the game always include where they are from or represent the area where they live. Hence the name Stephen Wise Baltimore.”

The designer has his sights set on the store being open 24-7. According to Wise, you never know when that inspiration hits to design something or some people want to design at different hours, I want my location to be that place where other designers can come and work.”

The store location is 216 N. Paca Street in West Baltimore. Wise has not officially opened, but he is doing some very creative things to get ready. Here is one little secret; once the store is ready, you will be able to see designers in the window designing an outfit in real time. We can’t wait! For more about Stephen Wise Baltimore, visit his Facebook Page: www.facebook.com/stephen.wise.