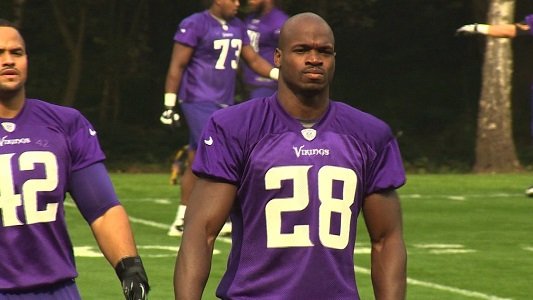 The Minnesota Vikings' Adrian Peterson takes part in practice exercises prior to an NFL game in London in September, 2013. (CNN)

(CNN) — Running back Adrian Peterson will not play for the Minnesota Vikings until his legal issues are resolved, the team said early Wednesday.

Read More: To spank or not to spank

It's a reversal of course for the Vikings. The team had earlier said that Peterson, who is facing a child abuse charge, would practice this week and could play in Sunday's game against the New Orleans Saints

In a statement early Wednesday, the team said Peterson has been placed on the NFL's Exempt/Commissioner's Permission list, which will require him to "remain away from all team activities."

"While we were trying to make a balanced decision (Monday), after further reflection we have concluded that this resolution is best for the Vikings and for Adrian," said a statement from owners Zygi and Mark Wilf. "We want to be clear: we have a strong stance regarding the protection and welfare of children, and we want to be sure we get this right."

Peterson is considered one of the best running backs in the NFL -- if not the best. His absence was probably felt during the Vikings' 30-7 loss to the Patriots last Sunday.

In 2011, he agreed to a lucrative contract, which NFL.com reported would be worth $100 million over a 7-year period.

Turn for the worse

But his fortunes have taken a turn for the worse since his indictment last week on a felony charge of causing bodily injury to his son.

On Tuesday, he lost one of his most significant endorsement deals when Castrol, a major producer of motor oil, pulled out.

Castrol used Peterson in commercials for its Edge performance oil product and on social media. Many recent social media posts of his likeness had been pulled down, and the commercials were no longer available on YouTube. (His other major sponsor, Nike, said late last week it would stand by its athlete for the time being.)

Also, the website for his All Day Foundation was taken off line after the charities represented on the site were getting "harassing" calls from gossip sites, his philanthropic adviser, Bruce Richmond, said.

"We took the website off line because the charities that Adrian supports were getting calls from the media and were getting harassed by the media," Richmond told CNN. "I spoke to one communication director saying she had received about a dozen calls today from the same gossip site."

Following his indictment, Peterson turned himself in to East Texas authorities Saturday and was released on a $15,000 bond.

The next step is a preliminary court hearing on October 8.

According to Texas law, people can be convicted of injury to a child if they cause bodily or mental injury "intentionally, knowingly, recklessly or with criminal negligence" or cause such harm by omission. The crime is punishable by up to two years in a state jail and a $1,000 fine.