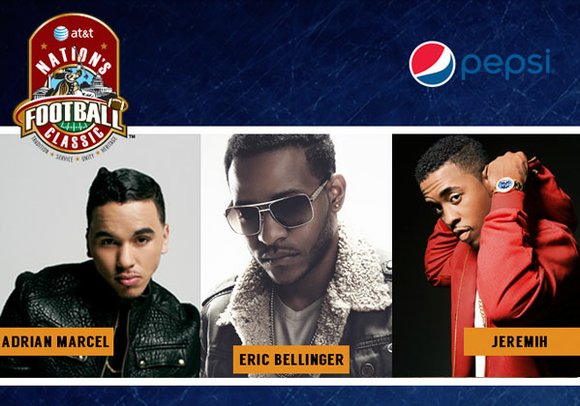 Morehouse College and Howard University football programs continue their longstanding rivalry in the fourth annual AT&T Nation’s Football Classic® at RFK Stadium on Saturday, September 13, 2014 at 3:30 p.m. After three competitive match ups in the Classic, the Morehouse Maroon Tigers and Howard Bison return to the field this year ready to battle for the 2014 trophy and bragging rights.

“It is one of those unwritten rules— this game is very important,” Head Coach Gary

This is an event where people of color and football lovers should come and support HBCU sports, tailgate and enjoy some wonderful entertainment prior to kickoff:

Presidential Symposium: Endowing the Mission of HBCUs: Just Cause or Just 'Cuz?

(Thursday September 11; 7:30 p.m.- 9 p.m.) Panel discussion featuring Howard students - past and present - alumni and scholars about the historical and contemporary role of Howard and other HBCUs, the missions of HBCUs and the developing strategies for the development and improvement of the Black community.

Presidential Symposium: Endowing the Mission, Resources and Intellectual Heritage of HBCUs (Friday September 12, 9 a.m.-12 p.m.) Panel discussion featuring current and prior HBCU Presidents and leaders of organizations that support HBCUs, reflecting on their concept of the HBCU experience and the opportunities and challenges before HBCUs today.

Singer-songwriters Adrian Marcel, Eric Bellinger and Jeremih will perform on the AT&T Soundstage during the FREE Pepsi® Fan Festival prior to the fourth annual AT&T Nation’s Football Classic® on Saturday, September 13, which begins at 11 a.m. and runs until 3 p.m. on the RFK Stadium Festival Grounds. The kick off between Morehouse College and Howard University is set for 3:30 p.m. in RFK Stadium.For more information about all of the weekend’s events, visit: www.nationsfootballclassic.com.