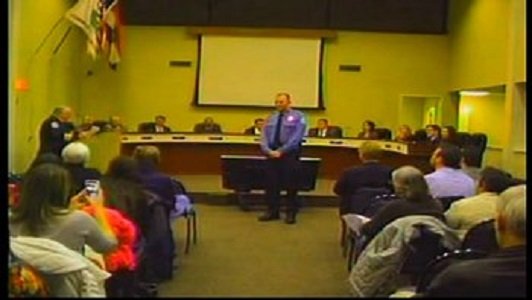 In this February 11, 2014 image from video released by the City of Ferguson, Missouri, officer Darren Wilson attends a city council meeting. Wilson is the officer who shot and killed Michael Brown on August 9, 2014. (Photo: City of Ferguson)

(CNN) — Shortly after being given more time to weigh evidence in black teenager Michael Brown's fatal shooting, a Missouri grand jury heard from the man at the center of it -- Ferguson police Officer Darren Wilson -- a local newspaper reported.

Wilson shot and killed the 19-year-old Brown in the middle of the day on August 9, in the middle of a street in the St. Louis suburb. Authorities could have charged Wilson themselves by filing a criminal complaint, but St. Louis County Prosecuting Attorney Robert McCulloch instead opted to present the case to a grand jury that could indict the officer, or not.

On Wednesday, Wilson testified for almost four hours in front of the seven men and five women on that grand jury, according to the St. Louis Post-Dispatch, citing a source with knowledge of the investigation.

The same source cited by the paper claimed that the Ferguson police officer, who was put on paid administrative leave after the shooting, has been "cooperative" in his two conversations with St. Louis County investigators and one with federal investigators. In addition to the county's case, the U.S. Justice Department has launched its own civil rights investigation into the shooting.

Unlike many other aspects of the legal system, grand jury proceedings are closed to the public. Their mission is not to decide -- unanimously -- if there's evidence beyond a reasonable doubt to convict someone on a charge, as is the case with a criminal jury.

Rather in Missouri, nine grand jurors -- or three-fourths of the total -- have to agree there is sufficient probable cause to charge someone with a crime.

The fact that grand jury proceedings are secret has irked Brown's camp, many of whom accuse McCulloch of being too cozy with law enforcement. They question his commitment to pressing a case against Wilson, who is white, for the shooting of a young African-American man.

The late teen's supporters have demanded Wilson be charged, accusing him of shooting the unarmed Brown when his hands were up. Meanwhile, Wilson's backers -- including a radio caller identifying herself as Josie, who recounted his purported version of events -- claimed that the officer only fired after the larger Brown struggled with, taunted and then ran at him.

There was no guarantee that Wilson would get the chance to tell a grand jury his side of the story. The defense doesn't present a case in these proceedings, which are run by prosecutors.

"Usually an accused will not be invited to testify," Neil Bruntrager, a criminal defense lawyer and general counsel for the St. Louis Police Officer Association, told CNN in August. "But I would expect, in a case like this, that an invitation would be extended to him."

So how will this all shake out? What will the grand jury of nine whites and three African-Americans decide? Will they indict Wilson, or will they clear him?

The public may not find out anytime soon.

On August 20 -- when mobs of protesters were still regularly hitting the streets of Ferguson demanding Wilson's arrest and, at times, clashing with law enforcement -- McCulloch told CNN affiliate KMOV that "the aspirational time is by mid-October to have everything completed."

And they could have more time, if they need it, than that.

CNN's Holly Yan and Tina Burnside contributed to this report.