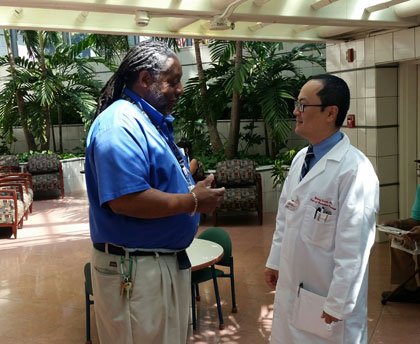 BALTIMORE — When Baltimore resident Kelvin Washington went to his primary care physician for a checkup in 2007, he didn’t expect anything to be wrong. However, it was at this doctor’s appointment that everything changed. His prostate-specific antigen (PSA) was high, and Washington was diagnosed with high-risk prostate cancer.

After hearing his prognosis, Washington, 53, decided to think about his options. He got second opinions and talked with his family. When Washington came back to see his doctor 30 days later, it seemed as though his body had made the decision for him.

“My PSA was climbing fast, and the doctors said it would be dangerous if I didn’t do something,” Washington said. “They said certain things will start shutting down on [me].”

Washington and his doctors agreed the best plan of action was to try to treat the cancer aggressively with radiation and other therapies, instead of surgery.

Washington took part in a clinical trial at the University of Maryland Marlene and Stewart Greenebaum Cancer Center. As part of the trial, specifically designed for high-risk prostate cancer patients, Washington received hormone therapy, external radiation, brachytherapy and chemotherapy. In brachytherapy, radioactive seeds are implanted in the prostate.

While the hormone therapy lasted throughout the years-long process, the other treatments were broken up into different stages: First was external radiation, then brachytherapy followed by chemotherapy, with breaks in between each stage.

Despite the intense treatment, Washington tolerated it very well, according to Dr. Young Kwok, an associate professor of radiation oncology at the University of Maryland School of Medicine, who was working with Washington throughout the process and leading the clinical trial.

The disease can impact all males, but African American men are about 60 percent more likely than Caucasian men to develop prostate cancer, and according to the Prostate Cancer Foundation, are nearly 2.5 times more likely to die from the disease. While most patients are able to survive if the cancer is caught early enough, high-risk prostate cancer has lower rates of survival.

“Only about half the people diagnosed beat this kind of cancer,” Dr. Kwok said.

Seven years later, though, Washington is cancer-free. Because he had an aggressive form of prostate cancer, he has a higher risk of it returning, but he said, he doesn’t focus on that anymore. He said throughout the process, he found his spirituality again.

“I believe that a higher power is controlling my destiny. I don’t fear recurrence,” he said.

Luckily, Dr. Kwok said, that although Washington will always be at risk of having his cancer recur, at this point the chances of his cancer coming back are quite low.

Washington showed no symptoms or visible signs of cancer when he walked into his doctor’s office in 2007. The last thing he expected was to find out he had the disease.

September is Prostate Cancer Awareness Month, and health care professionals urge men who have a concern to speak to their doctor about whether testing would be the right choice for them.

As for Washington, there is little doubt that a checkup is why he is still able to be around for his three daughters.