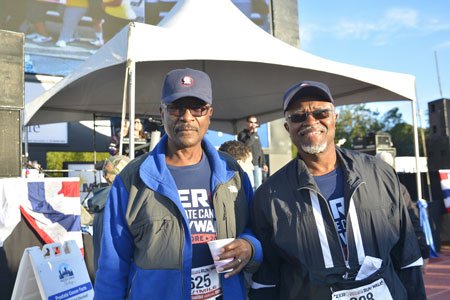 Siegel, who is president and CEO of Chesapeake Urology Associates, which is the largest urology practice in the Mid-Atlantic region, has witnessed what the mere mention of prostate cancer does, especially to those in the African American community.

Often, an individual will look away, pretend not to hear and eventually they’ll change the subject.

“I just thought something had to be done in the black community,” Siegel said. “I remember going to the general manager at Radio One and I told him that I wanted them to support a run that I wanted to put on to help raise awareness and the gentleman told me, ‘My people don’t run.’”

Siegel says he was told he needed to do something more substantial, so the intrepid doctor of more than 25 years decided that in order to reach the black community that he needed to visit the local churches where they worship.

He decided to hold prostate cancer screenings there and he said pastors such as the Rev. Marshall Prentice of Zion Baptist Church and the Rev. Frank Madison Reid at Bethel A.M.E. Church, helped to support his efforts.

The doctor’s message has been well received.

“About 300 community and church members came to one of the prostate screenings,” said the Rev. Hoffman Brown, pastor of Wayland Baptist Church in Baltimore. “Chesapeake Urology and Dr. Siegel are just extraordinary in terms of their reaching out to the African American community. They have a real concern and a gift for helping those who would probably not take this matter so seriously to be more conscious about it.”

His ZERO Prostate Cancer Challenge continues to raise funds and awareness for the disease which claims 30,000 lives annually.

Medical experts said by 2050, about 400,000 men will be diagnosed with prostate cancer on a yearly basis and deaths will rise to 100,000. African Americans have a 60 percent greater chance of getting the disease.

“Each year too many men get diagnosed too late,” said Pastor A.C.D. Vaughn of the Sharon Baptist Church. “Dr. Siegel has constantly reiterated, however, that the sooner a man gets tested, the better his chances are of survival.”

Siegel said he remains committed in his quest to find a cure, or at least an answer.

“Because of the staggering statistics, Chesapeake Urology remains committed to ending prostate cancer by helping to find a cure through the support of groundbreaking research and free screening programs,” he said.

In support of that commitment, Chesapeake Urology created The Great Prostate Cancer Challenge in 2007, a fundraising initiative solely focused on prostate cancer research, awareness, and free screenings for men in need.

It’s the only physician-based awareness and fundraising program in the country and has been adopted by 40 urology practices in 36 cities nationwide since its inception, according to a news release.

The ZERO Prostate Cancer Challenge fundraising efforts are focused around an annual 5K and 1 Mile Fun Walk each September during National Prostate Cancer Awareness Month. Since its inception, Chesapeake Urology physicians, staff, patients, families, and friends of the ZPCC have helped raise more than $2 million in Baltimore to assist in finding a cure and spreading awareness of prostate cancer.

“Building trust is important in the community and we’ve learned that if you promise something, you better deliver,” Siegel said. “The company has stood behind me and our doctors in this endeavor as we spread the gospel of health.”