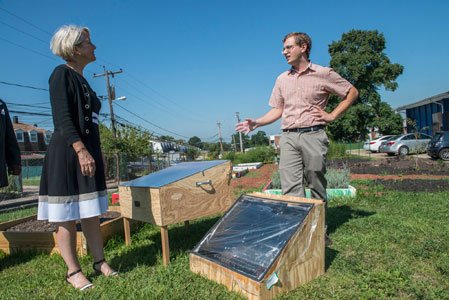 BALTIMORE — If Greg Couturier were channeling John F. Kennedy in speaking about the value of the Peace Corps, he probably didn’t realize it because his love of the organization, what it represents and what it has been able to accomplish, naturally comes to the fore in any conversation with him.

Couturier, a returned Peace Corps volunteer and Peace Corps Fellow affiliated with UMBC’s Shriver Center who served in Peru from 2009 to 2011, says the benefits of serving for the preeminent international service organization of the United States, cannot easily be measured.

“I’ve met incredibly brave, exuberant kids from some of the roughest parts of the city, I’ve met caring, concerned police officers, inspiring youth advocates and so many more,” said Couturier, who now works at Lakeland Elementary Middle School and is also pursuing a master’s of social work at UMBC.

Officials of the Peace Corps said those like Couturier are examples of Kennedy’s 1961 message to Congress where, upon formally introducing the program to lawmakers, the president promised that those who sign up to serve in the organization would acquire new and valuable skills and experience which would aid them in their future and add to America’s supply of trained personnel and teachers.

The president’s vision has proven true because since 1961, more than 215,000 Americans have served in 139 countries around the world in the Peace Corps.

On Wednesday, August 27, Peace Corps Director Carrie Hessler-Radelet visited the Lakeland school because she said she wanted to get a first hand look at how returned Peace Corps volunteers have been giving back to the Baltimore community.

Brooks Binau, who like Couturier, is a returned Peace Corps volunteers and current Peace Corps Fellow at UMBC’s Shriver Peaceworker Program, joined others for Hessler-Radelet’s visit.

Binau served in Zambia from 2011 until last year and is completing an internship working to enhance Lakeland’s community outreach and parent engagement.

Peace Corps officials said the student body at Lakeland is mostly made up of minorities, with approximately 90 percent being students of color and 94 percent coming from low-income families.

During her visit, Hessler-Radelet toured the Fellows’ projects at the school and she held a roundtable discussion that included Lakeland’s principal and the head of the local community association.

“For most volunteers, Peace Corps service abroad may only last two years, but the experience inspires a lifetime of service and commitment to community that is exemplified by our Fellows’ work at Lakeland Elementary and Middle School,” Hessler-Radelet said. “When our volunteers return home, they continue to give back and use their skills and experiences to help advance our economy and move our country forward.”

He said his work in the community and at Lakeland has proven to be the most satisfying. “The students at Lakeland have responded so well and since the school’s area has a big Spanish speaking population it was good for me to have been to Peru and learn the language,” Couturier said. “I’ve been able to use my ability to speak Spanish to connect with a lot of students and their families.”

Peace Corps volunteers are sent to assist those around the globe with the most pressing of needs, officials said.

Upon returning home, volunteers are able to bring their knowledge and experiences as well as a global outlook back home where they can help enrich the lives of those around them.

“I think the real challenge is finding something meaningful to do with all that experience once you get back home,” Couturier said. “It’s a wonderful thing to be a part of and to help your community.”