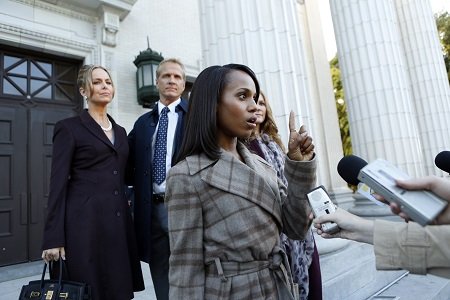 (CNN) — Call Shonda Rhimes an "angry black woman" if you want, but be prepared for the response.

A Twitter firestorm erupted Friday morning when New York Times writer Alessandra Stanley described Rhimes, the producer of ABC's "Scandal," "Grey's Anatomy" and the new "How to Get Away with Murder," by using the term "angry black woman" in a feature about her.

"When Shonda Rhimes writes her autobiography, it should be called 'How to Get Away With Being an Angry Black Woman,' " Stanley wrote. The story later observed, "Ms. Rhimes has embraced the trite but persistent caricature of the Angry Black Woman, recast it in her own image and made it enviable."

Immediately, the Internet reacted, led by a bemused Rhimes, who observed that she didn't create "How to Get Away with Murder."

"Confused why @nytimes critic doesn't know identity of CREATOR of show she's reviewing," she tweeted in response to a tweet from Pete Nowalk, who did create the series. (Incidentally, Nowalk -- a former "Grey's" staffer -- is a white male.)

Rhimes was just getting started.

"Apparently we can be 'angry black women' together, because I didn't know I was one either! @petenowa #LearnSomethingNewEveryday," she continued.

And, noting that Stanley had highlighted a rant from "Scandal's" Olivia Pope (Kerry Washington) as illustrative of Rhimes' own perceived anger, she wondered why other rants by white characters don't get the same attention.

"Final thing: (then I am gonna do some yoga): how come I am not 'an angry black woman' the many times Meredith (or Addison!) rants? @nytimes," she tweeted.

Others also lit into the Times piece.

"So Shonda Rhimes is 'angry black woman' but Aaron Sorkin 'delivers an opinionated speech' and 'forceful denunciation'," posted Sarah Kendzior of "The Newsroom's" writer and creator, who's also fond of rants.

"Too many thoughts on the Shonda-Rhimes-Is-An-Angry-Black-Woman debacle. Mostly: REALLY, @nytimes?!" added Rachel Simon.

Stanley wondered what all the fuss was about.

"The whole point of the piece -- once you read past the first 140 characters -- is to praise Shonda Rhimes for pushing back so successfully on a tiresome but insidious stereotype," she said in a statement.