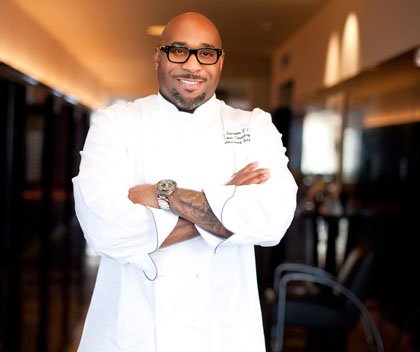 Walmart is teaming up with acclaimed chef, cookbook author and TV host, G. Garvin, and calls on the public to support their local food banks by voting online at www.walmart.com/fightinghunger.

The Walmart Foundation has launches “Fight Hunger. Spark Change. ” a nationwide campaign calling on the public to get involved in the fight against hunger. The campaign will provide $3.7 million in grants to participating Feeding America food banks and local partner agencies that provide hunger relief to millions of people in need of food assistance.

As part of the initiative, Walmart is teaming up with acclaimed chef, cookbook author and TV host, G. Garvin, and calls on the public to support their local food banks by voting online at www.walmart.com/fightinghunger.

The initiative launches during a critical time in our nation when food banks are facing a growing need for donations due to historically high rates of food insecurity.

Feeding America recently released its Hunger in America 2014 report showing that in a single year one in seven Americans, including 12 million children, turn to the Feeding America food bank network for food assistance.

To help Feeding America meet this need, Walmart is teaming up with six of the nation’s largest food companies— including General Mills, Unilever, Hormel, ConAgra Foods, PepsiCo/Quaker and Kellogg Company— to support food banks and local partner agencies across the country.

“Hunger remains a serious issue in our country as millions of Americans don’t know where their next meal will come from. By engaging our associates, customers and suppliers in the fight against hunger, we can make a positive impact on this issue and ensure families have access to the healthier and nutritious food they need,” said Kathleen McLaughlin, president of the Walmart Foundation and senior vice president of Walmart Sustainability. “Through this initiative, we’re giving everyone in America the opportunity to make a difference by simply voting online for their local food bank.”

Until October 5, 2014, customers can visit www.walmart.com/fighthunger to cast one vote per day that will help direct grants to participating Feeding America food banks and local partner agencies across the country. The 50 winning food banks will each receive a $60,000-grant. The campaign also provides information on how customers can donate or volunteer to take a direct action in the fight against hunger in their local communities.

“One of my biggest passions as a chef is showing people how simple it can be to make healthy and delicious meals for their families,” said Chef Garvin. “Walmart’s Fight Hunger. Spark Change.” campaign is making it simple and fun for the public to get involved and will help ensure all families have access to the healthy and nutritious food they need. I could not be more proud to support a cause that matters so much to so many.”

Through the initiative, the monetary equivalent of more than 37 million meals will be donated to Feeding America food banks and local agencies throughout the United States.

“At Feeding America, we believe no one in America should have to worry about where their next meal is coming from so we are proud to continue our partnership with Walmart to help make this vision a reality,” said Bob Aiken, CEO of Feeding America, the nation’s largest hunger-relief organization. “Through this initiative, Walmart, along with its associates, customers and suppliers will make a lasting impact in helping to reduce hunger in America.”

As the nation’s largest grocer, Walmart is in a unique leadership position to i

mpact the issue of hunger in the United States and joining with customers, suppliers, government agencies and nongovernmental organizations will only help magnify its efforts.

“The Fight Hunger. Spark Change.” campaign is just one step towards Walmart’s larger commitment to provide meals to those in need, and give more people access to nutrition education. As part of that commitment, Walmart is also working to ensure the food donated is fresh and a healthy alternative.

To participate in the voting campaign, learn more about the program, including details on participating products, visit www.walmart.com/fighthunger.