ABC's 'Black-ish' gets a strong start 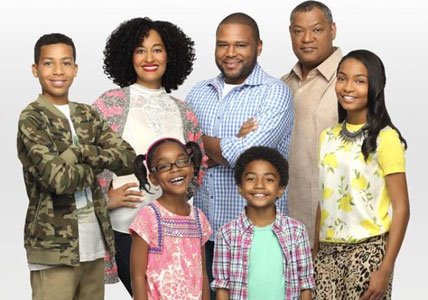 (CNN) — ABC's newest family, the affluent Johnsons on "Black-ish," has been very well-received.

The freshman comedy, about a successful African-American family man's struggle with cultural identity, made its debut on the network Wednesday night to impressive ratings. The pilot episode had an audience of 10.8 million and a rating of 3.3 in the key demographic of 18-49.

By comparison, "Black-ish's" lead-in, the multiple Emmy-winning "Modern Family," started its sixth season Wednesday with 10.9 million watching and a rating of 3.7.

To put it another way: This is exactly how you want your pilot episode to launch.

Dad Andre "Dre" Johnson (Anderson) is an advertising exec raising four kids with his doctor wife (Ross). He is also acutely aware of how far he's come from his upbringing.

"I guess for a kid from the 'hood, I'm living the American dream," Anderson's Dre says in an opening voiceover. "The only problem is, whatever American had this dream probably wasn't where I'm from. And if he was, he should've mentioned the part about how when brothers start getting a little money, stuff starts getting a little weird."

Dre admits that he sometimes feels like "a bit of an oddity" in his neighborhood, and throughout the pilot he worries that his four kids are growing up without a clear understanding of who they are. For example, his son Andre Jr. prefers to be called "Andy," tries out for field hockey instead of his dad's sport of choice, basketball, and is angling for a bar mitzvah for his birthday.

And at work, Dre is faced with eye-rolling questions from colleagues on "how a black man would say good morning," and the possibility that he was promoted to head the agency's "urban" division because of his race. (Dre's internal response to the promotion: "Wait. Did they just put me in charge of black stuff?")

But while Dre's fretting could (and does) raise more serious conversations about race, class and identity, "Black-ish" is still a comedy, and critics have praised it for knowing just how to leverage its complex subject for laughs.

"Even in a better season, ABC's provocative and very funny 'Black-ish' would stand out for its broad and biting satire of an uneasily post-racial society seen through a very modern-family prism," said TV Guide.

"I'm grateful that 'Black-ish' exists, first and foremost because it's funny," said The Huffington Post's Maureen Ryan. But, she continued, "'Black-ish' has to be more than just another pretty good sitcom. As one of the few comedies on a major network with a predominantly African-American cast, it has to navigate the issue of race in America. It can't just be funny, it has to be astute and adept as well. The good news is that so far, it navigates that challenging territory with intelligence, wit and subversive purpose."

Entertainment Weekly wasn't as convinced, critiquing the series as "funny, but ... not revolutionary." Giving it a "B" grade, EW's critic felt the comedy "skews too broad," and some of that mixed reaction could be found on Twitter. Responses ranged as widely as flat-out hating it and finding it racist to being pleasantly surprised.

But of course, we're only one episode in, as Time's James Poniewozik pointed out in his review. " 'Black-ish's' nuance is promising -- it's aware that there's not just one way to be black -- and the sheer level of execution suggests it has staying power," he said. "For now, I can only say what I want to hear about any new half-hour: it happens to be funny."