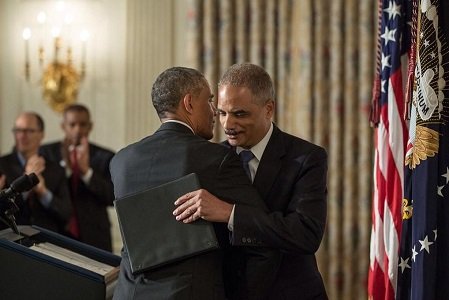 Attorney General Eric Holder announced Thursday that he will resign after six years at the helm of the Justice Department. (Pete Souza/White House)

Some congressional Republicans have accused the attorney general of defying the 2013 Supreme Court ruling in Shelby v. Holder, which struck down a component of the Voting Rights Act, and they investigated him over Operation Fast and Furious.

In Fast and Furious, the so-called gun-walking operation, roughly 2,000 guns were allowed into Mexico with the goal of tracking them to Mexican drug cartels. Two guns found at the scene of Border Patrol Agent Brian Terry's fatal shooting in December 2010 were linked to the operation.

In June 2012, the House voted to hold Holder in contempt of Congress for refusing to turn over documents linked to that operation.

But Holder has his supporters, including the top Democrat on the Senate Judiciary Committee.

"I particularly appreciate how Attorney General Holder has restored the Civil Rights Division to its historical mission," Sen. Patrick Leahy of Vermont said.

Those sentiments were echoed by Rep. Marcia Fudge, chair of the Congressional Black Caucus. She said Holder's departure "will leave a significant void in this administration and in our nation."

The attorney general is one of only three remaining members of Obama's original Cabinet.

In 2013, Holder described his first meeting with Obama, which occurred just after Obama was elected to the U.S. Senate in 2004.

"I sat next to him at this dinner and we just started talking about a variety of things, sports among them and criminal justice issues. And we saw that we had a lot of similar views and so we just started a relationship that was casual," Holder said.

Holder was sworn in as the 82nd attorney general in February 2009 after serving as President Bill Clinton's deputy attorney general, the first African-American to serve in that position.

CNN's Deirdre Walsh and Paul Courson contributed to this report.