'How to Get Away with Murder': Did you watch? 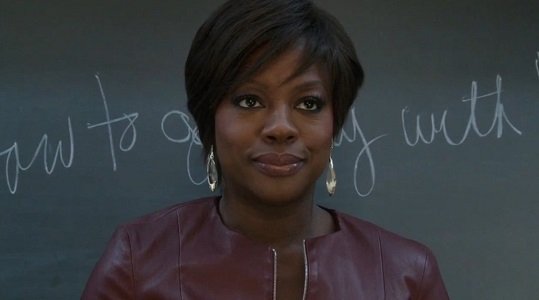 Viola Davis stars as a charismatic law professor in the new ABC series "How to Get Away with Murder." (Photo/ABC)

Gather 'round, students: "How to Get Away with Murder's" Viola Davis is teaching a lesson in how to win a TV show.

The Oscar nominee stars in ABC's much-anticipated new drama from the house of Shonda Rhimes, and it debuted Thursday to critical applause and solid ratings.

The third show in ABC's new Thursday night block devoted to Rhimes' programming -- "Grey's Anatomy," "Scandal" and "How to Get Away with Murder" air one after another, beginning at 8 p.m. -- "Murder" was the strongest of them all in terms of number of viewers.

"How to Get Away with Murder," meanwhile, debuted to an audience of 14 million and had a 3.8 rating in the 18-49 demographic.

"Murder," which is executive produced by Rhimes and created by "Grey's Anatomy" writer/producer Peter Nowalk, sees Davis play Annalise Keating, a smooth criminal defense attorney and professor who's as alluring as she is mysterious.

Keating shares the screen with a crew of eager law students working to win her approval. As their prof, she offers them a chance to intern with her firm if they perform well on an assignment.

But the group of students we meet in "How to Get Away with Murder" wind up facing a much bigger test when there's a dead body involved.

After catching the pilot episode, most critics agree that the students may be an integral part of the story -- which, despite not being created by Rhimes, certainly has her trademarks -- but it's Davis viewers will come back for.

"While the show has certain Rhimes' accents -- a strong female lead, a large and diverse ensemble, a willingness to pile on complications -- it is very different from any of the series she has written," says the Los Angeles Times. "Annalise wears neither a white hat nor her heart on her sleeve ... (and) seems more than capable of being both Sherlock and Moriarty. Backward, in heels."

For HitFix's Alan Sepinwall, the pilot runs into trouble when it focuses too much time on the students and their deadly mystery.

"The characters involved are so much less compelling than Annalise that it feels like a magic trick gone awry -- sleight of hand that keeps pulling your attention from the one person who makes the show work," Sepinwall writes. "Viola Davis is a star, and it's long overdue that she got to frontline a show like this. It'd be a shame if that show winds up underusing her because it didn't trust that she'd be enough through the sheer brute force of her personality."

The A.V. Club, which was also frustrated by a lack of Davis screen time, believes that the series has promise.

" 'How To Get Away With Murder' faces some of the same issues many Shondaland properties have faced: a weakness for melodramatic plotting that sacrifices emotional complexity for clichés and mere complication," the review says. "But it has excellent bones, grounded in an outstanding pedigree and Rhimes' demonstrated ability to keep an audience hooked from scandal to scandal. It's not perfect, but it's never boring."

After Thursday's premiere, viewers seemed to agree, with many tweeting that they've found their new favorite show.