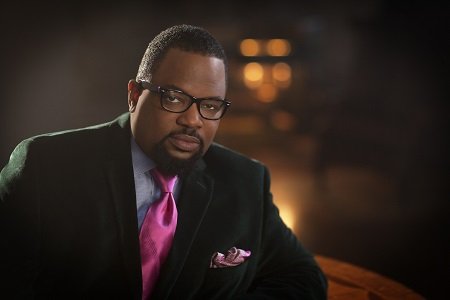 WASHINGTON (NNPA) — Grammy Award-winning artist Bishop Hezekiah Walker can add the 2015 Torch Award for religion to his list of accomplishments as a gospel music artist and pastor of Love Fellowship Tabernacle, a mega church in Brooklyn, N.Y.

The National Newspapers Publishers Association honored him last week at Black Press Week in Washington for his diligence in spreading the gospel through music, radio and ministry.

“I was extremely shocked when I heard that I won this honor,” Walker said. “I quickly changed my plans to make sure I was there to receive it.”

Walker, 52, was born and raised in the Fort Greene housing projects in Brooklyn, He formed the Love Fellowship Crusade Choir when he was in his 20s and has been releasing music with the choir and solo since then.

Walker is also the senior pastor of Love Fellowship Tabernacle, a church that he founded in April of 1994. The church has brought together diverse members, differing races, socio-economic backgrounds and ages.

“I really feel in my heart that out of all the awards I’ve won, the Torch award is the best award I could have ever received in my life,” he said. “Music is the foundation of our people. Its one thing when others recognize you, but its another thing when your own people recognize you.”

There is, however, one honor that meant way more to him than receiving both the Grammy and the Torch Award. That was finding out that his music helped to save the life of a 9-year-old boy.

Willie Myrick, 9, was grabbed from the streets last March and forced into a car by an unidentified man while playing with his dog outside his home in Atlanta.

Young Myrick, who was awarded the NNPA’s Junior Newsmaker Award, continuously sang Hezekiah Walker’s hit song Every Praise. He sang the song for three hours straight until the kidnapper finally threw him into the street and drove away.

“I have had many great things happen in my life, but just to save that young boy’s life really meant a lot to me,” Walker said. “When you begin to sing and put music out, you never know how many lives you touch across the world.”