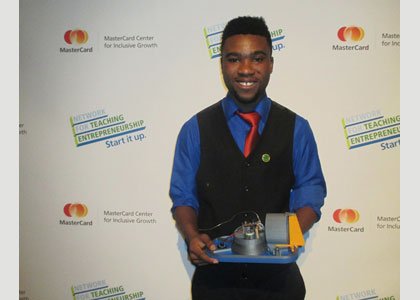 BALTIMORE — Cyprian Ekeagwu used to fix remote control toys when he lived in Nigeria before moving to the United States.

So, about three years ago when a teacher at Patterson High School in Baltimore asked him to design “something good, something fresh,” the aspiring entrepreneur immediately recalled his roots and came up with what instructors called a captivating idea.

“We had to design and build a project in our class, so I came up with the idea of a hovercraft,” said Ekeagwu, now a junior at Morgan State University who is pursuing a double major in transportation and industrial engineering. “When my teacher first saw it, she told me that I could do better, so I started to think critically and came up with the hovercraft.”

He named the design, Green Tech, a radio controlled educational hovercraft toy built exclusively from recyclable materials and on March 25, 2015, Ekeagwu joined an exclusive group of others from around the country at the Network For Teaching Entrepreneurship (NFTE) Global Showcase in New York to accept the Global Young Entrepreneur of the Year Award.

“I was astounded,” Ekeagwu said. “It’s an honor to be chosen out of all the many people in Baltimore, in Maryland and to have ideas like this to be recognized and put in a category with people from different states and countries is such a great, great honor.”

Winners of the honor receive scholarships and other business start up incentives and, in New York, Ekeagwu’s 3D prototypes really thrilled the audiences, officials said.

He said he received support from 3D Maryland and educator Sharon Brackett to further his mission to develop a 3D prototype.

“People from all over the world came to the awards ceremony and each country choose their best, so it was a chance for me to be a part of something great,” said Ekeagwu, who noted that he plans to eventually become a mechanical engineer.

The 20-year-old says he knows he has a lot of schooling ahead of him, but is enjoying the experience. He said despite the heavy representation of other cities, states and countries at the awards ceremony, Baltimore had no shortage of honorees and participants.

University of Baltimore graduate Keenen Geter served as maser of ceremonies for the event while NFTE’s global educator, Karl Sanzenbacher of Roland Park, received an honor for his work helping students in the classroom develop their entrepreneurial skills and mindset.

Dr. Dawn Gayapersad also received a special award for exemplary volunteer service for her work with young individuals in Charm City. She was selected from a pool of 11 national candidates who were nominated for the honor.

When asked what winning the award means to him as an aspiring entrepreneur, Ekeagwu said it can’t easily be measured. However, it has provided a solid foundation on which to build what appears to be a successful future.

“I have all of the tools now,” Ekeagwu said. “They’ve showed me the road to success and I’m going to take that road all the way to the end.”