College students use spring break to volunteer, give back 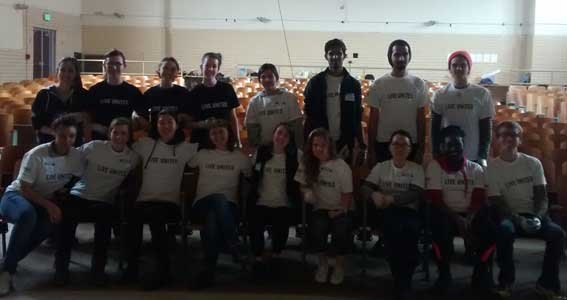 On Tuesday, March 10, 2015, student volunteers participating in the Alternative Spring Break program cleaned the auditorium at the Benjamin Franklin High School – United Way Family Center in Baltimore. They also cleaned and organized the basement of the center to create storage and added space for future programs. Student United Way Worldwide is a program that helps less fortunate communities and gives college students a chance to give back. (Photo: Charlene Mayo)

Spring break is usually a time when college students go home to visit their families, work to save money or most likely party! It’s not often that you hear about young college students donating their spring break to give back to less fortunate communities.

Student United Way Worldwide is a group that offers students from a variety of universities a month long alternative spring break program which gives the young adults the chance to help rebuild neighborhoods, schools, houses, help with family stability and fundraise.

Amanda Townsend, a junior at Penn State University, is a site director for the Penn State team. A major in criminology, Townsend has been working with Student United Way since her freshman year. Townsend explains that she wanted to go into the communities where criminals come from so she can see things from their perspective. “I would like to know more about why they commit the crimes they do, so, I can relate to them,” Townsend says. She wants to work within the system to change the system. She wants to reintegrate them back into society rather than condemn them and lock them behind bars. Learning a new perspective makes Townsend feel inspired.

Ben Rowles, is a sophomore at Penn State studying English. Rowles wants to be an English teacher after he graduates from college. When asked why he is volunteering his spring break to give back to society, he says he’d rather be doing something meaningful instead of going home and indulging in relaxation.

Student United Way Worldwide is a program that helps less fortunate communities and gives college students a chance to give back.