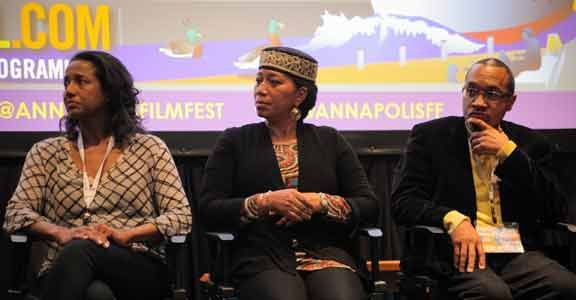 A piece of local history made it to the big screen during this year’s Annapolis Film Festival on March 27, 2015. A special preview screening of “JFK & LBJ: A Time for Greatness” was held at Asbury United Method Church. The Civil Rights Act of 1964 and the Voting Rights Act of 1965 were two highlighted statutes prominent in the film directed by Alastair Layzel. The late Geraldine Whittington who graduated from Wiley H. Bates High School in 1948 was also portrayed in the documentary. Whittington reportedly lived in South County. She attended Bates because it was once the only high school black students could attend in Anne Arundel County. 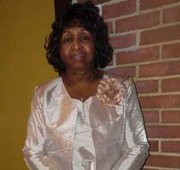 Alma Cropper participated in the documentary, “JFK & LBJ A Time for Greatness.”

The yet-to-be released PBS documentary explored aspects of President Lyndon B. Johnson’s plan of action after Kennedy was assassinated. Johnson reportedly called Whittington one evening in the early 1960s to ask if she wanted to join his secretarial staff. Whittington accepted the job to work as president Johnson’s personal executive secretary.

“She [Whittington] was always ready when the president (Johnson) had to leave,” 80-year-old Alma Cropper said, recalling a story she heard about Whittington’s pre-packed suitcase.

Cropper is the event chairman of the Wiley H. Bates Legacy Center. The fellow Bates graduate appeared in the documentary to help tell the story of the first African-American executive secretary who worked in the White House. Cropper was also instrumental in connecting filmmakers with another Bates graduate who is her good friend and Whittington’s cousin. Gladys Holt Peevy, who also appeared in the documentary, provided intimate details of Whittington’s life, along with stories that Cropper recalled hearing.

“My involvement came when these persons called the Bates Legacy Center where I am the event chair. They wanted to know if anybody knew Geraldine Whittington. I said I remember Geraldine. She went to school here and was from down in the country. They asked me if I could give them information. I knew that we had a yearbook. I knew something about her, because I had heard some of her stories,” Alma Cropper said. “Almost about a year later, they [producers] called me and said they were ready for the interview.”

Moviegoers clapped for Cropper as she walked to the front of the church to be recognized. Cropper later said that participating in the documentary was an exciting time for her. She reminded the audience how rare Whittington’s prestigious employment opportunity was in the 1960s.

“She [Whittington] was an African-American woman being asked to work for the president of the United States. That was a big deal in itself— just being a part of that. That was just history, because back in those days, nothing like that was likely going to happen, but they did. I felt that was just an opportunity that the president (Johnson) saw that could possibly help to break the ice in this country for racism and all of those things,” Cropper said.

Kurt Schmoke, the former mayor of Baltimore and current University of Baltimore president, moderated a discussion celebrating 50 years of civil rights, after the documentary was shown. Chris Haley, a writer, actor ; Suzanne Kay, a producer, writer and journalist; and Ambassador Shabazz, a speaker, diplomat and eldest daughter of Malcom X participated in a panel discussion.

The third year of the film festival was marked by observable growth and increased partnerships. The Rev. Dr. Carletta Allen, pastor of Asbury United Methodist Church, opened the doors of the church to host film events and panel discussions during the Annapolis Film Festival. She attended the screening of “JFK & LBJ A Time for Greatness,” in addition to other films.

Lee Anderson and Patti White serve as Annapolis Film Festival directors. They are also co-founders of the festival. Anderson and White were also in attendance.