Ravens defensive backs coach Chris Hewitt has work to do! 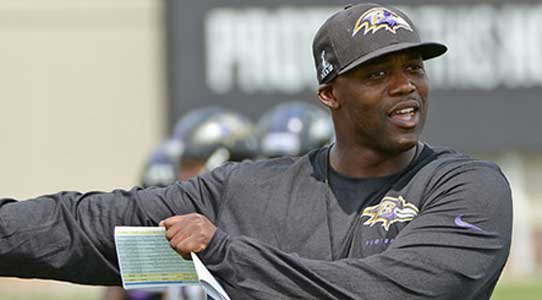 The Baltimore Ravens are known for having one of the more stingy defenses in the NFL. However, one area of the defense that requires improvement this year is the secondary. (Photo courtesy/Baltimore Ravens)

BALTIMORE — The Baltimore Ravens are known for having one of the more stingy defenses in the NFL. However, one area of the defense that requires improvement this year is the secondary.

Hewitt was an assistant coach at Rutgers University before joining the Ravens’ coaching staff. He played high school football in New Jersey and has lived there since he was five years old. Hewitt’s first exposure to coaching in the NFL came by participating in the NFL Minority Coaching Fellowship Program. He completed training camp stints with the Cleveland Browns, Philadelphia Eagles and the Ravens.

The Ravens secondary was struck with injuries last season. Their biggest loss came when Jimmy Smith injured his foot and was out for the remainder of the season. Smith played corner as well as anyone in the NFL at the time of injury. Veteran corner Lardarius Webb also missed time due to a lingering back injury. Webb began to regain his form very late in the season.

As of now, Webb and Smith are set to be the starters at corner. Asa Jackson missed a large portion of last season due to injury but he will be back this year to serve as a nickel corner.

The safety position is an area that the Ravens have attempted to address by way of free agency and early draft picks and signed free safety Kendrick Lewis recently. The team used a first round draft pick on struggling safety Matt Elam in 2013 and used a third round draft pick on Terrence Brooks last year. One move that did work out was bringing in Will Hill after being released by the New York Giants.

Hewitt will be charged with getting the veteran secondary up to speed. He was very excited about the Lewis signing and expressed it when the team introduced Lewis at a press conference.

The team will likely add to their secondary by way of the 2015 NFL Draft. The Ravens have been linked to many defensive backs at the East-West Shrine game, the Senior Bowl and at the NFL Scouting Combine. The team holds the 26th pick in the first round, which could very well be used on a cornerback.

One first round option that is likely to be on the board for the Ravens is Marcus Peters from the University of Washington. Peters was dismissed from the Washington football team but has said that he has learned from his past mistakes. His man press ability is a perfect match for the Ravens scheme.

Coach Hewitt will have to be a steadying influence on Peters, if the Ravens decide to use their first round pick on the talented cornerback. The team has also been linked to USC corner Josh Shaw, who has faced some trouble as well but he has said that his focus is on football and that he realizes the opportunity that he is blessed with.

The first season as Ravens secondary coach will be a key one for Hewitt. He will need to rely on his past experience as an NFL defensive back along with his coaching history to make it all work.