Wells Fargo launches campaign for African-Americans to tell their stories 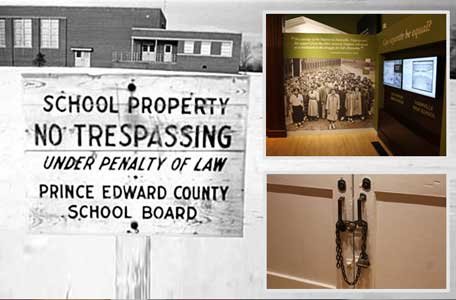 By 1959, many Virginia schools had began to integrate, but not Prince Edward County, whose supervisors voted to close the schools rather than integrate--an act marked by the signs posted at schools and the Moton Museum exhibits today (Courtesy Photos/Wells Fargo)

Chaquita Venable tells a compelling story about her late father Clem Venable, who because of segregation in Virginia missed five crucial years of schooling and never recovered. However, that never stopped him from strongly encouraging an academic course for his five children, all of whom he witnessed earn college degrees before his death in 2013.

Chaquita Venable stands outside the Robert Russa Moton Museum, previously the school that her father, Clem, had to leave when Prince Edward County closed its schools in 1959 instead of integrating them.

“My dad told me not to worry about people calling me a nerd because I studied hard and hit the books,” Chaquita Venable, a 2010 graduate of Old Dominion University in Virginia and a Baltimore resident.

“Dad said, ‘Your education will take you a long way. Get it while you can because you can’t get back missed opportunities.’ That’s what we’ve all done,” said Venable, who’s a part of Wells Fargo’s Black/African Connection Team Member Network.

Former Army Master Sergeant Harold Cole said his family has a long legacy of military service, including his grandfather who served in World War II and several cousins who served recently in the Middle East.

Cole enlisted in the military in 1942 when he was 17 because he had experience riding horses. He was assigned to all-black Troop F of the Ninth U.S. Cavalry in Texas.

“I was a bit nervous about going to Texas because I had heard bad stories about the South,” Cole said. “When I got there, I noticed that the southern officers treated us better than the northern officers. I guess they were more accustomed to interacting with black people.”

The stories of Venable, Cole and so many others are coming to life in a new Wells Fargo & Company initiative called, “The Untold Stories Collection,” a social media movement dedicated to sharing personal stories that define what it means to be African-American today.

Each of the stories can be read in their entirety on the company’s designated webpage.

Using the hash tag #MyUntold, the aim is to create a platform for building cultural awareness and promoting healthy dialogue. It is a catalyst for self-expression that celebrates the community by showcasing the broad range of experiences among a common culture, according to Frison.

“By contributing, individuals are upholding the long-standing African-American tradition of storytelling in a way that is relevant today,” Frison said. “Being an African-American woman, when you think about our perseverance and the character of black people, there are so many stories out there way beyond what we’ve captured, so we want to continue this.”

Wells Fargo, which recently helped to bring the Kinsey Collection to the Reginald F. Lewis Museum, launched the official #MyUntold website to serve as the central hub to upload, share and view stories.

Individuals can view untold stories from unknown and more well-known African Americans across the country, including influencers, community leaders and celebrities, like Cornell William Brooks, the president and CEO of the NAACP, who shares how his life is a direct result of the sacrifices made by him and others that he will never know, according to a news release.