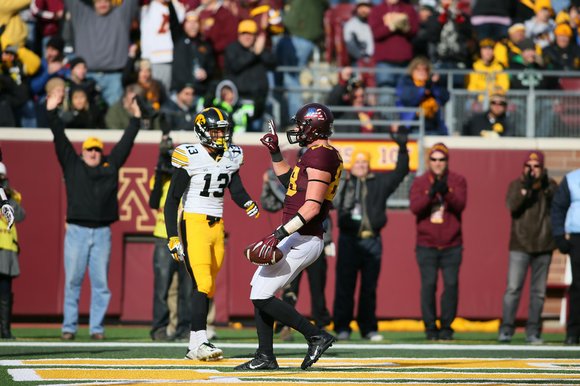 Williams is the top rated tight end on many boards and his catching ability warrants such high praise. big12sports.com

BALTIMORE — The Baltimore Ravens have some questions at the tight end position. Owen Daniels was the most productive tight end for the Ravens last season, but he has moved on to the Denver Broncos with former offensive coordinator Gary Kubiak. Veteran tight end Dennis Pitta has been a favorite target for quarterback Joe Flacco. He suffered another season ending hip injury last year. His status for this season is unknown. That leaves second year tight end Crockett Gillmore as the top tight end.

Gillmore showed some signs of promise towards the end of the season, but the tight end position is one that the Ravens will need to address in the 2015 NFL Draft. If the team decides to get a tight end early, Minnesota tight end Maxx Williams would be the ideal candidate.

Williams is the top rated tight end on many boards and his catching ability warrants such high praise. Tight ends are being used by offensive coordinators to create match up advantages. Williams is a very athletic tight end that will present problems because of his ability to line up in the slot and out wide. He has the size (6-4, 249 pounds) and arm length (33.5 inch arms) that gives quarterbacks a very large window to throw the ball into. Williams makes use of his long arms by consistently extending his arms to catch the ball away from his body, both in traffic and when it is required to high point the ball on the sideline.

One of the main tasks that tight ends are charged with is being a reliable target for their quarterback on third downs and in the red zone. Williams is more than capable of filling that role. Large portions (82%) of his catches were for either first downs or touchdowns. When he gets the ball in his hands, he makes it count.

Williams will have the ability to make an immediate impact for whatever team that selects him. He explained how playing in the offense at the University of Minnesota helped prepare him to be a versatile tight end in the NFL. “The offense at Minnesota taught me how to be an inline blocker and play in a power scheme.” Williams continued; “It worked to my advantage because I had the mismatches in the play action game. I’ve also had the opportunity to split out and get one on one match ups.”

The athleticism that Williams brings to the table truly showed when he scored a 54 yard touchdown against Missouri in his last game as a college player. He caught the ball on a corner route then hurdled a defender before avoiding another tackle and dove into the end zone for the score. The body control that is required to make that kind of play is rare for an athlete with Williams’ size.

The video below shows the elite catching ability that Williams possesses. Williams is lined up in the slot. He and the outside receiver execute a rub route combo to perfection. The defenders didn’t switch off; rather they chose to stay with their original man. When the routes crossed each other, a good degree of separation was created. This allowed Williams to get over top of the defender as he worked his way down the sideline.