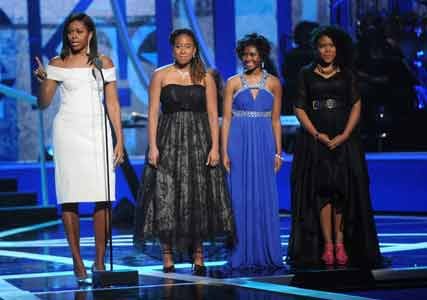 Fifteen-year-old Gabrielle Jordan (far right) from Bowie, Maryland was honored as a M.A.D. (Making A Difference) Girl during the 2015 Black Girls Rock!™ awards, which aired on BET on Sunday, April 5, 2015. First Lady Michelle Obama recognized the M.A.D. Girls for their outstanding professional achievements during the ceremony, as they listened on stage. The other M.A.D. Girls are Chental-Song Bembry (middle) and Kaya Thomas (left). Gabrielle is the youngest of the three girls honored. (Courtesy Photo/BET)

Gabrielle Jordan is a 15-year-old jewelry maker, sought-after motivational speaker, author, entrepreneur and mentor from Bowie, Maryland. She was honored as a M.A.D. (Making A Difference) Girl during the 2015 Black Girls Rock!™ awards program, which aired on BET on Sunday, April 5, 2015.

Of the three young ladies who were honored as M.A.D. Girls, Gabrielle was the youngest honoree. The other two honorees are Chental-Song Bembry and Kaya Thomas. 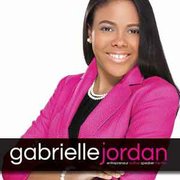 This year, First Lady Michelle Obama delivered a speech during the empowering extravaganza that celebrates achievement of black women and girls.

“I think my favorite part was going onstage and meeting Michelle Obama,” Gabrielle said. “It was really awesome to be able to be on stage with her, give her a hug and her telling us that she was proud of us. We went backstage and she made sure that we got a picture with her. It was really cool.”

Mollon-Williams said she was so focused on helping her daughter prepare for her M.A.D. Girls appearance, that it was only at the event that she realized the magnitude of the honor that Gabrielle received. She also said she was thankful to God for the opportunity to be hands-on with Gabrielle and to be able to watch her daughter live out her dream as a child.

Ron Williams, Gabrielle’s proud father, produces his daughter’s videos and photographs her handmade jewelry, which is available for sale at http://jewelzofjordan.com. Gabrielle founded Jewelz of Jordan at the age of nine.

The home-schooled student wrote the No. 1 Amazon best-selling book, “The Making of a Young Entrepreneur: A Kid’s Guide to Developing the Mind-Set For Success” at the age of eleven.

Mentoring youth is Gabrielle and Mollon-Williams’ recent endeavor. In 2014, the mother and daughter founded the ExCEL Youth Mentoring Institute.

“Our goal with the entire institute is to continue the work and to cultivate the seeds of youth and leadership within every young person. ExCEL stands for Excellence Created through Entrepreneurship and Leadership,” Mollon-Williams said.

ExCEL Youth Mentoring Institute offers free membership. Weekly videos, newsletters and resources are sent to enrollees. The mother and daughter team also created a fee-based six-week course called the Mastermind class that is conducted through Google Hangouts. Youth from across the country participated in the last class. This month, Gabrielle will lead sessions with nine other young entrepreneurs who already started a business or who desire to do so. A subscription-based program for girls is also in the works.

The Mollon-Williams’ philosophy to instill confidence in her two children at an early age began when she volunteered with her husband as a youth leader. When the couple dated, they reportedly gained considerable insight about the importance of youth knowing who they are.

“Our goal was to make sure that our children were confident leaders from the time they were born,” Mollon-Williams said. “All of my family is from Trinidad and my husband is African-American. We were able to instill strength from bothsides. In a nutshell, I tell people that consistency is huge. Every single night we spoke into our children’s lives who they are, what they will be, what they are capable of. When you consistently plant seeds of strength, and of confidence, and of knowing who they are, it makes it a lot harder for the world to come in and tell them something different.”

Gabrielle is still elated about her recent recognition, although she is no stranger to receiving awards.