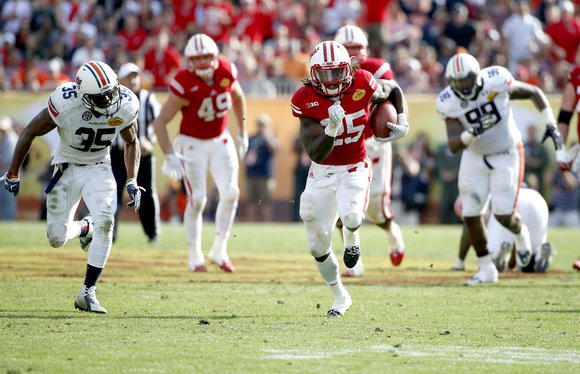 Gordon is a player that can reach the end zone any time that he touches the ball. His one cut ability is perfect for the zone blocking system that new offensive coordinator Marc Trestman plans to have remain a staple in the Ravens offense. www.outbackbowl.com

BALTIMORE — There is one question about running backs that pops up every year throughout the NFL Draft season. That question is whether or not there will be a running back taken in the first round. It’s something that hasn’t happened since 2012 when Trent Richardson (3rd to Cleveland Browns), Doug Martin (31st to Tampa Bay Buccaneers) and David Wilson (32nd to New York Giants) where all selected in the first round. Given the lack of success that the aforementioned players have had due to a variety of reasons, one may come to the conclusion that a running back simply isn’t worth using a first round pick.

Many say that the running back position is devalued in today’s game. That statement holds a degree of truth but it also is false. The reason why we can say that is because NFL teams have placed a lower monetary value on running backs but these same teams are well aware of the importance of having a running game in those late months leading up to the Super Bowl.

The 2015 NFL Draft boasts two running backs that are definitely worthy of being first round draft picks. In fact, it would be very surprising if Georgia’s Todd Gurley and Wisconsin’s Melvin Gordon aren’t selected in the first round. That’s because teams want players that can score at any given moment from anywhere on the field. In short, they want home run hitters.

Melvin Gordon is known for his ability to break off long runs. The Baltimore Ravens could be looking to use the 26th pick on the dynamic playmaker from Wisconsin. He would be a nice complimentary player to Justin Forsett who led all NFL running backs in yards per carry (5.4) and explosive runs (17). Like Forsett, Gordon is a big time playmaker that can make a single cut and get to the second level of the defense in a hurry. This could be why Gordon is the list of player visits for the Ravens.

Gordon has the acceleration ability similar to that of a small, high performance sports car. He also has a vicious jump cut that he uses to pop into different gaps and poke through the smallest crease in the defense. Gordon is able to explode out of the jump cuts and hit the turbo button to eat up chunks of yards on his carries. He hits full stride and top speed in flash. Gordon will also finish some of is runs by delivering a nice blow.

The video below shows how Melvin Gordon is able to use his change of direction ability to find a gap and hit it for a long run. Gordon is going against LSU in this game. Now, on this play, LSU stacked eight defenders the box. Getting past the second level of the defense against eight in the box is like finding a small treasure in the ocean for running backs. The reason being, once you do so, the likelihood of getting a long gain is very high. The hard part is breaking through the eight guys that are in the box but if a seam opens up, see you later!