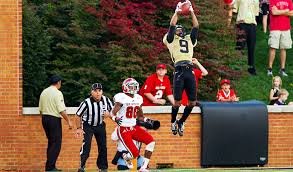 BALTIMORE — Wake Forrest corner-back Kevin Johnson is a name that continues to be mentioned as a strong possibility for the Baltimore Ravens in the first round. He is actually best friends with Michael Campanaro, one of the Ravens 2014 draft picks. Like Campanaro, Johnson is a local product. Both of them are from Clarkesville, Maryland.

Kevin Johnson is a very smooth corner that has elite movement skills. He also has a bit of an edge to him, which is a plus for a somewhat undersized player. Johnson is 6 feet 175 pounds but he isn't a liability in run defense. You won’t see many “hit stick” kind of tackles when Johnson goes against running backs but he still is able to wrap up and bring the ball carrier down.

Johnson made it a point to add some muscle to his frame and is pleased to have done so without losing speed or flexibility. “I weighed in at 188 pounds. Throughout training, I was at that weight as well. I was carrying that weight and maintaining speed throughout training.” Johnson concluded; “I feel even better now and I am still growing.”

He has cat like quickness and very fluid hips that allow him to stick to receivers in man coverage. His change of direction ability as well as his ball skills is what the scouts like most about him. Johnson has a natural feel for covering receivers and doesn't overreact when the ball is coming his way. He simply times his jump as he goes up and knocks the ball away.

When watching Johnson at Wake Forrest, it becomes obvious that he can play in any kind of scheme. If you ask Johnson about his press ability, his eyes light up. He described press coverage as one of his better traits when he said; “Press coverage is a great strength for me. I am a longer corner-back; I have size, speed and quickness to change their direction at the point of attack.”

Johnson can also fit into a zone scheme. He is a student of the game and is able to diagnose route combinations. Once he figures out where the offense is trying to go with the ball, he is able to close on the ball very well.

The video below shows how Johnson is able to read the quarterback and make a pretty athletic interception. This game is against Clemson. Johnson is lined up at the top of the screen. Clemson tries to run a rub route to get the two defenders confused. The two defenders do a great job of exchanging receivers and not hindering each other from coverage.

He is aware of the possibility that the receiver may run a shorter route and he breaks down just in case that is the case. Johnson shows great patience as he allows the receiver to run to him rather than falling for the head fake. Once the receiver turns up field, Johnson is able to make a baseball turn without losing a step as he runs down-field with the receiver. He reads the quarterback’s eyes, times his jump and breaks up the pass.