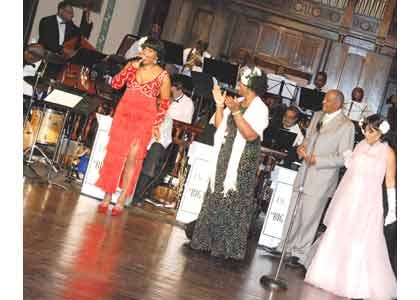 All singers and performers were on stage together for the grand finale at the Billie Holiday 100th Birthday Celebrations at the historic Orchard Street Church in Baltimore on Tuesday April 7, 2015. (Photo; Yvonne J. Medley)

BALTIMORE — Produced by Tom Saunders of Renaissance Productions and Tours and the Greater Baltimore Urban League, the musical tribute celebrating Billie Holiday’s 100th birthday was done in the finest of style at Baltimore’s historic Orchard Street United Methodist Church on Tuesday, April 7, 2015. The event’s theme was “God Bless the Child.”

Almost 400 people showed up to pay tribute to Billie Holiday at the well-organized event. It was if the sky had opened up and all the folks who used to hangout at the Sphinx Club and Pennsylvania Avenue who are still alive and kicking were there. The guests were dressed to the nines and the second floor of the church hall where the celebrations were held was beautifully decorated.

“Good Morning Heartache” was sung by Larzine Talley; “Lady Sings the Blues” was sung by Denyse Pearson; “Strange Fruit” was sung by Sheila Ford; “God Bless the Child” was sung by Marlene Ross; “I'll Be Seeing You” was sung by Irene Jalinti; Kermit Golden sang “A Change is Gonna Come” and Steve Flynn sang “Lover Come Back To Me.”

The band played many instrumentals including “April in Paris” as performed by Count Basie. Each singer presented Holiday’s songs superbly in voice as well as attire. Each of the female singers wore carnations in their hair and beautiful long evening gowns. James “Big Jim” Staton, WEAA 88.9 FM radio personality did a fantastic job as Master of Ceremonies.

At the sold-out event, the guests enjoyed dancing to the music as well as listening to the nostalgic tunes with pride on their faces. The beautiful hostesses— hand-picked by Tom Saunders— dressed in black eveningwear with white corsages were very attentive to the guests. This indeed, was an evening that all the guests will remember for a long time.