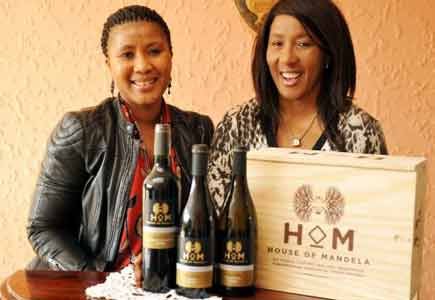 It's dreary outside, but Tukwini Mandela, granddaughter of late legendary South African leader Nelson Mandela, is full of light and enthusiasm. Her visit to Baltimore is the last stop on a three-week U.S. promotional tour for House of Mandela, the wine company she runs along with her mother, Dr. Makaziwe (Maki) Mandela.

The Mandelas are wine negociants, who work directly with selected South-African wineries that adhere to the Mandela’s values of fair trade and a diverse workforce. Launched in 2010, the brand continues to expand globally, and is currently in 15 markets, according to Tukwini Mandela. Still, they never forget a loyal customer base. “We have always received great support from Maryland and Washington D.C. There is a wonderful African-American community of wine drinkers here.”

Less than two percent of winemakers in South Africa are black. “Yes, and even fewer are black women. I actually know all of them,” she laughed heartily. Her response to the statistic is indicative of the family’s resilience and determination despite seemingly insurmountable obstacles. Their royal bloodline dates back to the 1800s, and includes the esteemed Chief Mphakanyiswa, Chief of Mvezo and father of Nelson Rolihlahla Mandela. At one point, Thembu land (pronounced “tembu”) was connected to a Kingdom in the country’s Eastern Cape. Despite these earlier illustrious circumstances, their collective history is marked by challenges.

Tukwini Mandela pointed out the parallel between this background and the wine process. “We always thought the vine grew in a straight line, it does not. It sort of weaves and bobs, provided the viticulturist takes good care of it. Our family story is very similar to that. We did not necessarily have an easy road. My grandfather did not have an easy life. But our family produced this great son of Africa.”

These unique experiences are inextricably reflected in the brand, beginning with its packaging. The bee on the Royal Reserve wine label alludes to Tukwini’s grandfather’s first name Rolihlahla which translated means “one who is brave enough to fetch the honey from the honeycomb,” she revealed in an earlier interview. There are numerous branches on the bee’s wings, and these symbolize the large Mandela family.

The ornate decoration on the Thembu collection bottles reference Nelson Mandela’s favorite attire, the colorful Madibe shirts. Eschewing suits, Mandela often dressed in a manner that he felt communicated accessibility to the people. The wine, too, invokes this casual and down-to-earth tone.

It's also partly the deep connection to people which drew Mandela and her mother to the business. “We fell in love with the workers who produce the wine,” she said. “Fair trade is there to make sure that the farm workers have adequate and acceptable living condition, and that they are paid fairly for their work.” Nearly 350,000 South Africans are employed by this industry, which constitutes three percent of the country’s GDP. Tukwini Mandela remains hopeful that in her lifetime more blacks, particularly younger people, will enter the industry and participate in a variety of roles. While, at the moment, there is no formal organization for black wine industry professionals, “the Department of Trade and Industry really goes out of their way to support black-owned businesses through funding,” she said.

Mandela sees the diversity of South African culture, and the warm disposition of its people as worthy of uplift; there is a different side of her country, she insists. “We want to present the best of South Africa.” Working with fair trade wineries is not the only way this family business gives back. They are involved with two charities in South Africa, My Life and St. Mary’s Foundation. Both organizations focus on helping young people succeed and overcome the sting of poverty. In addition to those efforts, they work with Spring of Hope, a nonprofit whose mission is “partnering with rural South African schools to bring them clean water sources and economic development opportunities.”

Ultimately, the House of Mandela, would like their wines to inspire meaningful connections for their customers. “We hope they will talk about their own family stories. Their own lineage. Everyone has a great ancestor that has sort of changed the trajectory of their family.”

Discover where to purchase the House of Mandela wines by visiting http://www.arcticwines.com.