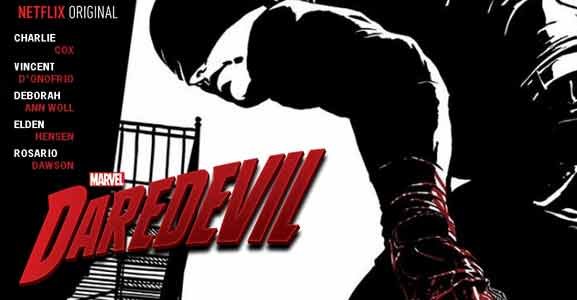 This review is strictly for my Super Hero geeks and comic nerds, like us here at Indie Soul. One of the all-time great comic book characters finally gets a real storyline, plot, and action courtesy of the folks at Marvel Productions, and the streaming service, Netflix. “Daredevil” made its debut on April 10th and it is captivating! Netflix continues to lead the way in streaming original content (“House of Cards” and “Orange is the New Black” are also Netflix shows).

The storyline? Lawyer-by-day Matt Murdock uses his heightened senses from being blinded as a young boy to fight crime at night on the streets of New York City's Hell’s Kitchen neighborhood as Daredevil. Unlike the Daredevil movie that starred Ben Affleck and Jennifer Garner, that was lighter and sort of campy, this reboot, is darker with a better storyline and multiple stories with each character having a story within the story. The casting was superb with Charlie Cox (Stardust, HBO’s Boardwalk Empire), as Daredevil; Vincent D’Onofrio (Law & Order: Criminal Intent) as Wilson Fisk; Vondie Curtis-Hall (Sugar Hill, Crooklyn, Drop Squad, Eve's Bayou, Chicago Hope) as Ben Urich, newspaper reporter; and Rosario Dawson (Top Five, Men In Black II, Seven Pounds) as Claire Temple.

“Daredevil” is definitely one to watch as one of four planned Marvel releases on Netflix. I Can’t wait for “Luke Cage,” a black Marvel super hero, which will star Mike Cotler, coming soon to Netflix.