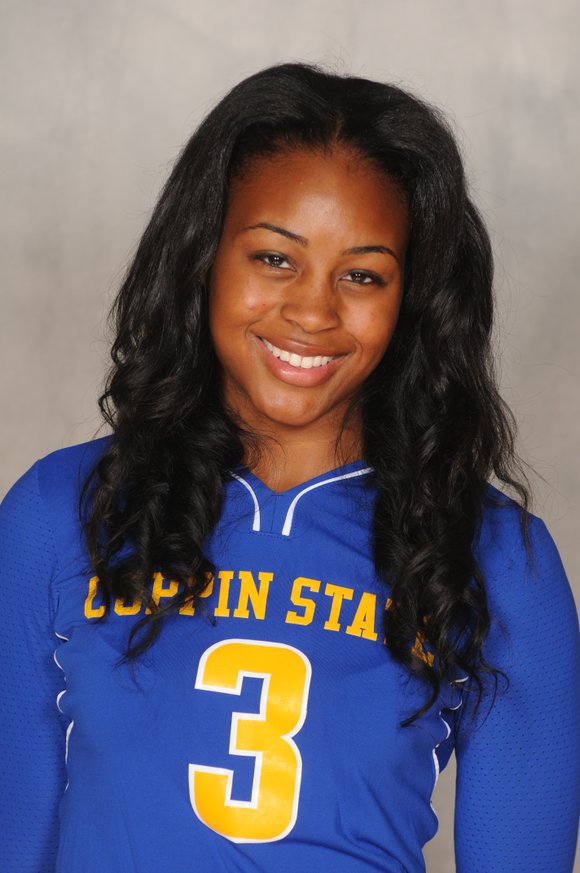 This past season, Richard was named second team All-MEAC and to the All-MEAC Academic Team. Courtesy of Coppin State Athletics

BALTIMORE — Ariel Richard’s dream of becoming a physical therapist is one step closer to reality after being named one of the winners of the NCAA Ethnic Minority and Women's Enhancement Postgraduate Scholarship for Careers in Athletics.

“Being awarded the NCAA Ethnic Minority Program Postgraduate Scholarship was a true blessing,” Richard said. “I am forever grateful to Coppin State University for their endless support and wisdom over the past four years. I am very excited and ready to begin my graduate studies and jumpstart my career.”

A three-time All-MEAC and four-time All-MEAC Academic selection, Richard is one of the most decorated female athletes in Coppin State history. She ended her volleyball career as the program’s all-time leader in kills (1,223) and points (1,392.5). She notched 18 double-doubles in her splendid career and had 61 matches in which she has posted double figures in kills.

Over the last three years of her career, Richard helped lift the CSU volleyball program to unprecedented heights. The Eagles won a program record 15 matches in 2014 and advanced to the MEAC championship match for the first time in school history.

This past season, Richard was named second team All-MEAC and to the All-MEAC Academic Team. She helped Coppin State advance to the MEAC semifinals for the second consecutive season by averaging 2.93 kills per set, 1.02 digs per set, 0.42 blocks per set and compiling a .256 hitting percentage, which was 10th in the MEAC. She was second on the team in kills (331) and seventh in the MEAC in kills per set. Richard had double-digit kills in 15 matches and recorded three double-doubles against LaSalle (15 kills, 11 digs), St. Peter’s (21, 14) and UMES (22, 12).

“I entered Coppin State knowing that I wanted to pursue a career in sports medicine,” Richard said in her scholarship essay. “The Women’s Minority scholarship will provide the opportunity to educate myself further in area of sports medicine. I will help to broaden the melting pot in physical therapy. According to my research, I noticed there are not many ethnic women working in this particular field. I believe I can be an asset and role model that will inspire other young women to pursue a career in physical therapy.”

Richard enjoyed a four-week experience working as an intern at the prestigious Johns Hopkins Hospital in the physical therapy and rehabilitation department last summer. A sports medicine major, Richard was able to get a first-hand look at what patients endured during their recovery. She remembers witnessing patients struggle to get out of bed and walk to the short distance to the restroom. The daily interactions with others left an indelible mark on the affable Richard.

“I just like seeing the progress of the patients,” Richard said in July. “From seeing them on the first day of their rehab, barely getting out of bed and standing up on their own and then being able to see them walk out of the hospital was really emotional for me. I like being able to help people get from their lowest point to their highest point.”

The Ethnic Minority and Women's Enhancement Postgraduate Scholarship for Careers in Athletics programs were developed by the NCAA Committee on Women's Athletics and the NCAA Minority Opportunities and Interests Committee.

The goal of the enhancement programs is to increase the pool of and opportunities for qualified minority and female candidates in intercollegiate athletics through postgraduate scholarships.

The NCAA awards $7,500 to 13 scholarships to ethnic minorities and 13 scholarships to female college graduates who will be entering their initial year of postgraduate studies. The applicant must be seeking admission or have been accepted into a sports administration or program that will help the applicant obtain a career in intercollegiate athletics, such as athletics administrator, coach, athletic trainer or a career that provides a direct service to intercollegiate athletics.