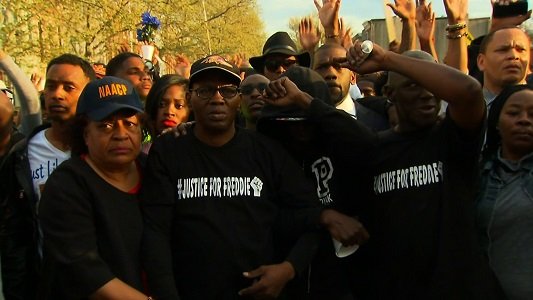 Freddie Gray's parents join protestors in Baltimore after the Baltimore Police Department released the names of six police officers suspended with pay after the arrest of Freddie Gray. (CNN)

The emotions are raw and protests are growing in Baltimore, where a community wants answers in the death of Freddie Gray.

Tuesday evening, as protesters chanted "No justice! No Peace!," Gray's distraught mother, Gloria Darden, collapsed in tears at the spot her son was arrested this month. She was whisked away.

Gray, a 25-year-old black man, died of a spinal injury Sunday, exactly one week after he was taken into custody.

The demonstrations are only gaining momentum. The crowd will be back on Wednesday in front of the Western District police station where Gray was taken after his arrest.

On Thursday, they will rally in front of city hall.

"We won't stop," one man said Tuesday. "We have the power and, of course, today shows we have the numbers."

A spokesman said the agency is investigating whether the civil rights of Gray were violated during a struggle on April 12.

An autopsy found that Gray died from a severe spinal cord injury, but Baltimore Deputy Police Commissioner Jerry Rodriguez told reporters Monday that there is no indication of how the injury occurred.

Police plan to conclude their own investigation by Friday, May 1. From there, the case will go to the state's attorney's office, which will decide whether to file charges.

Earlier in the day Tuesday, the Baltimore Police Department released the names of six police officers involved in the case. All have been suspended with pay.

After an "in-custody death," it's standard procedure to release the names of officers involved, said Kowalczyk.

It doesn't mean the officers did anything wrong, nor does it mean that these were the only officers involved, he said.

Of the six officers, three were on bikes and initially approached Gray, another made eye contact with Gray, another officer joined in the arrest after it was initiated and one drove the police van, Kowalczyk said.

Speaking to CNN's "Anderson Cooper 360," Baltimore Mayor Stephanie Rawlings-Blake said she understands where the protesters are coming from. She understands their frustration.

"Mr. Gray's family deserves justice, and our community deserves an opportunity to heal, to get better, and to make sure that something like this doesn't happen again," she said.

Adding to the frustration is an autopsy that hasn't yielded many answers in Gray's death. In fact, some feel it's prompted more questions.