Police union: "The images seen on television look and sound much like a lynch mob" 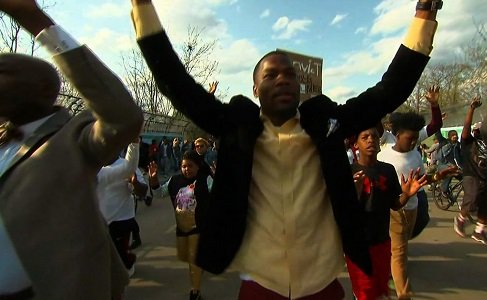 Protestors march in Baltimore in after the Baltimore Police Department released the names of six police officers suspended with pay after the arrest of Freddie Gray. (CNN)

(CNN) — As protesters decrying Freddie Gray's death plan more rallies in Baltimore Thursday, anger is mounting over a police union's comparison of the protest to a "lynch mob."

"While we appreciate the right of our citizens to protest and applaud the fact that, to date, the protests have been peaceful, we are very concerned about the rhetoric of the protests," the Baltimore Fraternal Order of Police Lodge 3 said in a statement.

"In fact, the images seen on television look and sound much like a lynch mob in that they are calling for the immediate imprisonment of these officers without them ever receiving the due process that is the constitutional right of every citizen, including law enforcement officers."

That comparison drew swift and sharp criticism, especially given the history of African-Americans being lynched.

"Which one is the #LynchMob again?" John Cotton tweeted, posting a photo of a peaceful protest next to photos of Gray during his arrest and hospitalization.

"The choice of words is not only ironic, it's sad," said Andrew O'Connell, an attorney for Gray's family.

"Police officers are never the subject of a lynch mob. It's actually usually the other way around," he told CNN's "Erin Burnett OutFront."

"And in the context of the powder keg that Baltimore city is right now, referring to the citizens of Baltimore city who are peacefully protesting as a 'lynch mob' doesn't serve to keep the peace. It only heightens the flames, or fans the flames of people who are already on edge."

Gray died Sunday, one week after he was arrested by Baltimore police.

At some point, he suffered a severe spinal cord injury. His family said his voice box was crushed and his neck snapped before he slipped into a coma and later died.

While Baltimore police say five of the six officers involved in the arrest have provided statements to investigators, the department has not released details of what the officers said or how Gray might have suffered the fatal injury.

Two rallies are scheduled for Thursday in Baltimore: one at noon, and one at 3 p.m. They will follow a series of demonstrations this week, with protesters demanding elusive answers.

Among the questions: Did something happen inside the police transport vehicle that caused Gray's fatal spinal injury? And what took place in the 30 minutes before police called paramedics to pick Gray up?

"Our position is something happened in that van," Baltimore police union attorney Michael Davey said. "We just don't know what."

But one question has already been addressed: Did officers have the right to chase Gray in the first place?

Police first encountered Gray on April 12 as they patrolled an area known for crime and drug activity. When Gray saw them, authorities said, he started running.

Gray's family attorney and protesters claim police didn't have any probable cause to chase him, but did so only because he was "running while black."