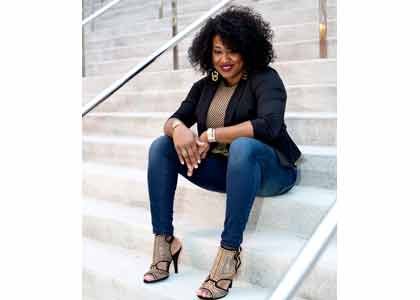 Baltimore native Naomi B. always knew that music was her calling ever since she was a young girl. She recently wowed an audience of thousands during a performance at her home church in Baltimore— Church of the Redeemed of the Lord. Her debut single, “Holding On,” is available for sale on iTunes, CD Baby and Amazon.com. (Photo: AJ Gonzalez)

BALTIMORE — Growing up on Baltimore’s rough east side, singer Naomi B and her friends used to knock on every door in their neighborhood to sing to anyone who would listen.

As a young girl, she knew music was her calling but it was also her refuge from the many negative elements that surrounded her. Now, years later, her musical journey has taken a major leap with the release of her inspirational debut single, “Holding On,” which is available on iTunes, CD Baby and Amazon.com.

Transparency has never been a challenge for Naomi B. Raised in the church, she was an extrovert who sang in the choir and took the lead in establishing ministries and singing groups. That is why when she recorded her song, it was easy to open up about her real experiences and share them with others.

“Holding On is a very transparent song that talks about being in that place of struggle where you honestly don’t know what the end looks like,” Naomi B. said. “Sometimes as Christians we believe that standing in faith means you only acknowledge where you want to be rather than the journey— but it’s important to recognize where you are right here and right now— because it’s in that moment that God can reach you and give you what you need. That is the message I wanted to relay with this song.”

Naomi B began singing professionally at the age of 21, shortly after graduating from college. With the desire to be an R&B singer, she looked up to artists such as Brandy, Monica and Toni Braxton. However, in 2006, that all changed.

“I felt that I was being called to sing for God,” she said. “I told Him if you give me the songs I will sing them. Since then, I committed to use my voice as an instrument through which God could reach people. This has been several years in the making.”

Moving forward as an inspirational singer, Naomi B desires to touch the lives of people from all walks of life. Thus far, the reception to her music has been tremendous. She recently wowed an audience of thousands during a performance at her home church in Baltimore - Church of the Redeemed of the Lord. Her first album, “Break Free,” is scheduled for release at the end of the summer, and for her, that time cannot come soon enough.

To listen to music from Naomi B, visit her website: www.naomibmusic.com and www.reverbnation.com/naomibmusic. Her new single, “Holding On” is available for sale on iTunes, CD Baby and Amazon.com.