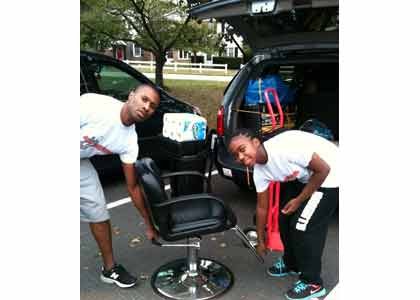 ANNAPOLIS, Md. — When money is extremely tight for families, haircuts and hairstyling are often not top priorities. Nevertheless, having a well-groomed appearance can be an important part of self-esteem. Robert W. Cradle, founder of the Odenton-based nonprofit called Rob’s Barbershop Community Foundation (R.B.C.F.), finds resources to fund grooming projects. Six donors— Allstate Capital Women in Business, Ronald McDonald House Charities, the Gilliam Foundation, The Meltzer Group, the Fort Meade Officers’ Spouses’ Club and Sam’s Club in Severn, Maryland— helped to bring a full-service barber/ beauty salon to the Phoenix Academy in Annapolis. In August of 2014, the school joined forces with R.B.C.F. to create a space where no-charge grooming services can be provided for students in need of them.

The principal of the alternative school, Dr. John A. Thompson says 200 students are currently enrolled at the Phoenix Academy. Marie T. Gomba is the school’s social worker that will identify students in need of assistance.

Before Rob’s Barbershop Community Foundation completed work at the Phoenix Academy in Annapolis, the space was used as a storage area. It was converted to a barber/beauty salon for students who need grooming services.

Based on information provided to Cradle by Gomba, the top barrier of students at Phoenix Academy to having regular hygienic and grooming care is lack of available household funds. Thus, Thompson said that he believes the new barber/beauty salon will benefit students on many levels.

“We want to make school a place where kids want to come. I think it’s a part of our way of building those relationships…and trust. It is something to offer them as a reward. It’s something that we can offer to kids who don’t have a means to do it on their own,” Thompson said.

Cradle has been running R.B.C.F. fulltime since 2003. His background includes barbering, resource development and nonprofit management. The nonprofit raises money to help provide grooming services for people who lack access to regular hygienic care. If Cradle believes that he can find donors who will underwrite a prospective project, he searches for supporters, installs equipment and gets the barber/ beauty salon up and running. R.B.C.F. and partnering schools locate contracted barbers, beauticians and volunteers to provide on-site services.

“It’s a unisex one-chair shop. We converted a storeroom that wasn’t being used as much. It is actually capable of performing services on all genders and races,” Cradle said, referring to the Phoenix Academy’s project. “Last year, we just did a case managed project with the entire AACPS (Anne Arundel County Public Schools) where we case managed...grooming and hygiene (services) for 90 homeless students in Anne Arundel County. This is actually the tail end of that. The same funding that we had to perform that case managed project, we were able to squeeze this particular project out,” Cradle said.

R.B.C.F. is a spin-off of Rob’s Barbershop, which was a barbershop once owned by Cradle. He started the nonprofit, after noticing that a number of students who are served through social service agencies like shelters did not have access to regular grooming. Through R.B.C.F., Cradle has handled 23 projects for portable shops, case management or fully installed projects in Anne Arundel County, Baltimore and the District of Columbia.

Thompson said Phoenix Academy takes a holistic approach to supporting youth. This undertaking is just another step taken to meet their needs. He expects that having the resource in the school will also help students to feel good about themselves, enabling youth to prepare for special occasions like prom season, holidays and graduation.

“I see it spiking a certain points of the year, but I also see it as something that we can consistently do for a number of kids kind of as a reward for coming to school and doing what they are supposed to do. In theory, every kid in this building has not been successful at their home school or comprehensive school, so we have to look to do things a little bit differently,” Thompson said. “I see it being a big win for us.”

To learn more about R.B.C.F.’s projects or to make a donation,