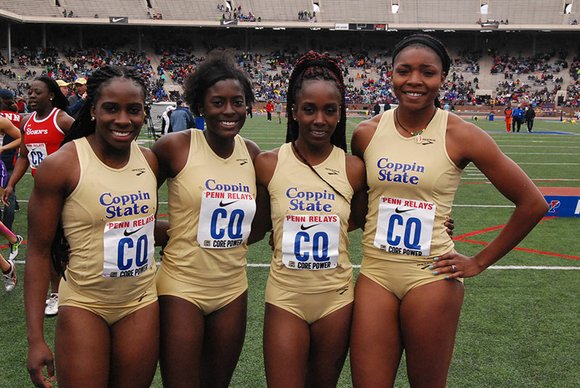 Despite the tough weather, the Eagles’ 4x100-meter relay team of junior Tanaya Yarde, Alexis Marsh, Miriam Ekwuru, and Randi Bohle was fourth in its heat in a time of 48.25 seconds. (Courtesy Photo)

PHILADELPHIA,Penn. — Competing in the Penn Relays for the first time in their lives, Coppin State’s Alexis Marsh, Miriam Ekwuru and Randi Bohler had a better vision of the conditions they’d be greeted with.

“When I had the picture of Penn Relays in my head, it was nice weather, sunny and hot,” Marsh said.

Unfortunately, Mother Nature refused to make that fantasy a reality on the opening day of the 121st annual Penn Relays at Franklin Field on the University of Pennsylvania’s campus Thursday afternoon. Instead of tropical conditions, the Eagles battled the rough elements of overcast skies, a brisk autumn wind and drops of rain as they struggled to stay warm in the paddock and on the track.

“It was very cold out here, which made it hard to run fast,” Marsh said. “The cold weather is not really working for me, but at the same time, I was happy to be here.”

Despite the tough weather, the Eagles’ 4x100-meter relay team of junior Tanaya Yarde, Bohler, Marsh and Ekwuru was fourth in its heat in a time of 48.25 seconds. The ultra-competitive Eagles weren’t pleased with their effort, but considering the windy conditions, the effort wasn’t bad. Two of the nation’s top 4x1 teams, LSU and Oregon, didn’t finish the race as well as they had baton exchange issues.

“It was different and new for me,” Bohler said of her first Penn Relay experience. “You don’t get a chance to really warm up and you’re standing in the cold forever. When you get to the line, you just have to run. It is awesome being here and I was nervous at first. It’s a big responsibility running on the 4x1 because I am a freshman. I had to hold my own.”

Yarde also shined in the 400-meter hurdles, winning her heat and finishing ninth overall in the event in a time of 1:00.97. The school-record holder in the 400-meter hurdles has the best time of any Mid-Eastern Athletic Conference (MEAC) athlete in the event. Running with a focused façade and gracefully sailing over the hurdles like a gazelle, Yarde had plenty in the tank to finish the race strong.

“I did well, but the race wasn’t up to my standards,” Yarde said. “My day wasn’t ideal at all. I didn’t have time to test my approaches to the hurdles. It was basically get on the track, loosen up a bit and go out there and run how you’re supposed to run.”

While Yarde was being hard on herself, Ekwuru was enjoying her Penn Relay experience. She anchored the Eagles’ relay team that had Bohler leading off, Yarde running second and Marsh going third.

“I really thought this was different from other track meets that we had,” Ekwuru said. “Even though this was my first time running here, I feel that this was a great experience and I really appreciate my coach bringing me here to run. I’ve never run on a track like this ever and I feel like it’s really awesome to have this experience. I am thankful for the experience of being here.”

Hopefully the weather will be better for NCAA Division I Indoor All-American and five-time MEAC champion Deandra Daniel when she competes in the College Women’s High Jump championship at 1:30 p.m. Friday afternoon.

“Tanaya did extremely well,” Coppin State head coach Alecia Shields-Gadson said. “To finish ninth overall with some of the technical mistakes was refreshing to see. I am impressed with how the 4x1 ran today. It’s just this cold weather. Who would’ve thought you’d be running in cold weather like this in April? It’s a good experience for the young kids. I am pleased with their performance today.”