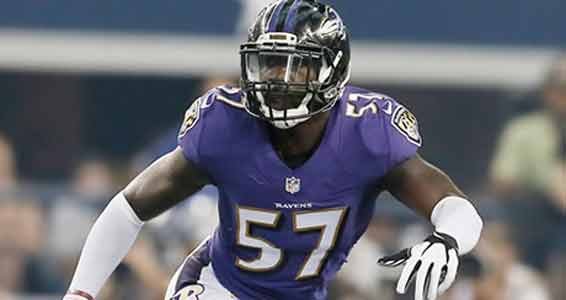 Ravens linebacker C.J. Mosley pursues a play in a game during his rookie 2014 season. Mosley likes the way the Ravens strength and conditioning staff set workouts, which has helped him isolate certain muscles enabling them to get stronger. (Courtesy Photo/Baltimore Ravens)

C.J. Mosley is coming off an outstanding debut season in the NFL. He was a consensus All Rookie selection and came close to winning the Defensive Rookie of the Year Award. Mosley recently took time to talk about adjusting to the Baltimore Ravens’ off-season program.

Mosley had wrist surgery recently and has not been able to do too much other than work with free body weights. He said that he is progressing. Injuries are a part of the game and Mosley isn’t immune to them. He suffered two shoulder injuries while he was at Alabama. Fortunately, that is something that he hasn’t had to deal with the Ravens.

Ravens Strength and Conditioning Coach Bob Rogucki had a good explanation as to why so many collegiate players suffer multiple shoulder injuries and how to limit those injuries from reoccurring.

“A lot of the people that come into the program, they don’t understand the shoulder capsule. That’s a big concern of ours.” Rogucki said. “We look at the shoulder capsule as bumpers on a car; they protect that capsule. We attack the shoulder probably more than most guys coming into our program, because of the vulnerability that is there every time they receive a blow on the field.”

The need to strengthen and condition the shoulder for all of the hard hits is especially the case for a linebacker like Mosley.

Mosley says that the weights they lift at the Ravens facility are different from the ones at Alabama. The team does more lifting with free weight, which helps Mosley because of his previous shoulder injuries.

Mosley says he likes the way the Ravens strength and conditioning staff set workouts according to how the body is, which has helped him to isolate certain muscles enabling them to get stronger.

The recovery time in an NFL off-season before getting back to workouts is actually longer than Mosley experienced during his time at Alabama. He says that the biggest change from college for him has been the timeframe. At Alabama, the players got a few weeks off after the bowl game and then they were right back at it, doing mostly condition and workouts.

Adjusting to a new city has been fun for Mosley. He says he likes that Baltimore is a football town. The first time he saw the rich, green surroundings at the Under Armour facility in Owings Mills, he was pleasantly surprise.

“[When] you hear Baltimore— you hear city and you think all you’re going to see are buildings here and there,” Mosley said.

Fortunately for him, the really cold weather didn’t hit Baltimore until after the season ended when he had already left to go back home to Alabama.

Mosley is thankful that he didn’t have to endure the bad elements of the mid-Atlantic climate in the winter.