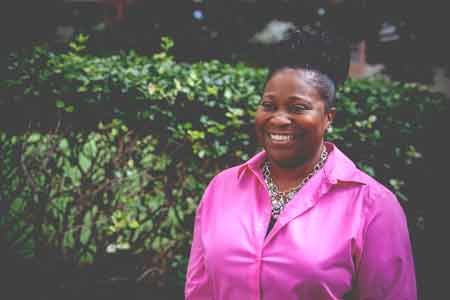 BALTIMORE — She was just as surprised as her colleagues when she discovered that she had been named one of the top nurses in Baltimore.

It wasn’t because Tanya Allen didn’t deserve the honor, it was because to her and those who know her, it is no secret that she loves her job and going above and beyond is simply second nature.She was just as surprised as her colleagues when she discovered that she had been named one of the top nurses in Baltimore.

“I learned through an email that I was one of the winners but when I first saw the email I thought it was a hoax,” said Allen, a 16-year veteran of nursing who decided when she was just 14 that she wanted to be a nurse. “I ignored the first email but then I kept getting more emails and decided to finally open one of them up. I was like, ‘maybe this is for real.’”

Indeed, it was for real! In a survey drawing hundreds of nominees over a nine-month period, Allen was selected among the nursing elite by Baltimore Magazine for its inaugural “Excellence in Nursing” Top Nurses 2015 list.

According to a news release, in order to arrive at the results of the survey, Baltimore Magazine recruited a panel of registered nurse advisors appointed by the Maryland Nurses Association and major local hospitals, to review nominations and select the top candidates under 18 different nursing specialties.

Allen, the director of health services at Roland Park Place, the only nonprofit continuing care retirement community in Baltimore City, oversees the operations at the center, its on-site Ambulatory Care Center, and all aspects of health and wellness support for residents.

Incidentally, a serious illness she suffered as a 14-year-old proved to be a pivotal moment in her life and it led Allen on the path to a career in nursing.

“I had a stroke when I was 14 and the nurses at Johns Hopkins Hospital here in Baltimore treated me very well,” Allen said. “So, I thought that I could be a person who could provide the same kind of care to others.”

When Allen told her mother, Grace Crowner, about her career plans the idea didn’t exactly resonate.

“My mom was a little taken aback at first because she thought seeing blood would scare me,” said Allen, who holds a Bachelor of Science degree in health systems management from the University of Baltimore.

However, her mom and Allen’s husband, Leroy, have been among the nurse’s biggest cheerleaders, she said.

“[They are] very supportive,” Allen said. “I’ve sincerely enjoyed working as a nurse and working with older ones. I just have a love and a passion for people.”

Allen says her first director of nursing, Betsy Euris, proved to be a true inspiration for her and taught her everything that she needed to know about caring for her patients.

She says she wouldn’t trade nursing for any other job in the world and being named among the top 50 nurses in Baltimore is just the icing on the proverbial cake.

“I was once the patient and now I’m providing the care for those who can’t provide it for themselves and that’s really the highlight for me,” Allen said.

In dispensing advice to aspiring nurses, Allen noted that the nursing field is large with many areas in which an individual can choose to work.

“I’d tell those who want to be a nurse to find their niche and flourish,” she said. “Never stop learning because things are always changing in nursing so it’s important to keep abreast of those changes.”