A few brave peacemakers tried to intervene on Baltimore's streets 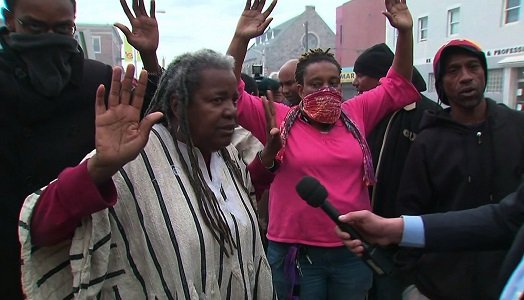 The peacemakers -- clergy, Gray's family and brave residents -- placed themselves in the rioters' way. Their message was the same. (CNN)

BALTIMORE — Please, not even a demonstration. Freddie Gray's family had asked there be quiet on Baltimore's streets the day they laid him to rest. And above all, no violence.

Raging hordes turned a deaf ear to that Monday. But a handful of people repeated the family's message. They became criers in the desert against countless young people flinging rocks at police, breaking windows, looting and setting fires.

The peacemakers -- clergy, Gray's family and brave residents -- placed themselves in the rioters' way. Their message was the same.

"I want them all to go back home," said the Rev. Jamal Bryant.

"It's disrespect to the family. The family was very clear -- we've been saying it all along -- today there was absolutely no protest, no demonstration," he said.

But the messengers were a finger in a dam that quickly crumbled, as rowdy groups swelled into a full urban riot. It overshadowed the message peaceful protesters delivered on prior days -- justice for Gray.

The 25-year-old African-American man died from spinal injuries after being arrested earlier this month.

The early fits of violence came in the afternoon, about the time mourners left Gray's memorial services blocks away, Bryant said. They bumped right into it.

"For us to come out of the burial and walk into this is absolutely inexcusable," he said. He did not want to see it spread to downtown Baltimore, where some rioters said it would, and he organized people to stand in the way.

"We have a line of gentlemen from the Nation of Islam to build a human wall, as well as men from the Christian church making that human wall," he said.

But as crowds turned into multitudes, the intervention became a drop in the bucket by compare, and police lines were also no match.

As officers in riot gear receded, flames engulfed cars and stores and roared out of apartment buildings into the night sky. A senior living facility under construction by a Baptist church burned to the ground. The blazes stretched the fire departments' resources, as at least 30 trucks deployed.

Looters streamed into a CVS, bodegas and liquor stores and walked out with what they could carry.

A young man in a blue sweatshirt tried to talk people down by himself.

He walked up to CNN correspondent Miguel Martinez, as a store nearby was being looted. It later went up in flames. The man, who didn't say his name, was disgusted by what was happening in his neighborhood and disappointed in the police response to rioting.

There was a line of police down the street, not far away. "They could have moved down here to stop it," he told Martinez.

The Gray family's lawyers, again, put the family's wish out to the public that there be no protests that day, let alone violence.

It's marring the cause and hope for change that may have come out of the investigation into Freddie Gray's death, said family attorney Mary Koch. "That's just disintegrated into just looking at Baltimore city and thinking that the city is the city of violence," she said.