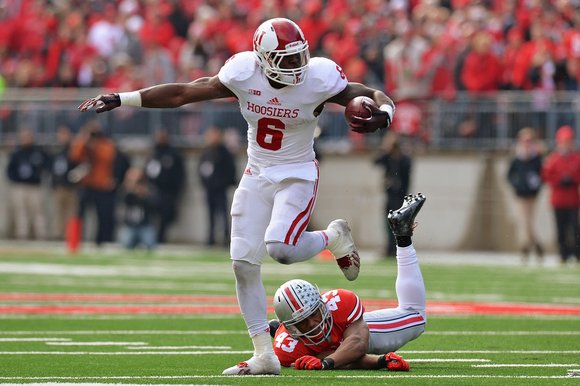 How will Baltimore Ravens address their needs at Running Back during the 2015 NFL Draft? Indiana University Hoosiers

BALTIMORE — The Baltimore Ravens signed Justin Forsett to a long term contract and officially got him out of “the friend zone.” The move is a step towards stabilizing the running back position. Second year player Lorenzo Taliaferro is a big back that could be relied upon in short yardage situations. After those two, there are definitely some questions as far as depth is concerned.

The 2015 NFL Draft is rare in that there are two running backs that have a legit shot of getting selected in the first round. Melvin Gordon and Todd Gurley are two explosive players that would fit into the Ravens zone scheme very well. Both of these players could very well be available when the Ravens are on the clock with the 26th pick. There are also some pretty solid options that will be available in the second and third round. Here are the top prospects that the Ravens could get in the first couple of rounds:

Gurley is the most explosive running back in this draft class. He has a track background and it shows when he pulls away from defenders. Gurley is a tough running back that runs through tackles and always runs downhill.

Gordon is a perfect runner for the Ravens zone scheme. He has the ability to see running lanes open up in advance and can make the necessary cuts to get into the lane. His acceleration is elite and it is exactly what allows him to get to the second level of the defense in a hurry.

We all know that Ozzie Newsome loves Alabama prospects. Yeldon is a big back that could be a third down specialist. He does a good job of gaining those tough yards. Yeldon is also a dangerous weapon on screens, another reason why he would be an ideal third down back for the Ravens.

Coleman is a north and south runner that hits holes right away. Like Gordon, he has the ability to make cuts and change gaps quickly. Coleman can demolish the angles that defenders take when he hits the second level and that leads to some explosive plays.

Johnson is another home run hitter with top level acceleration. He is also a very good option out of the backfield. He and Forsett are very similar in build and running style.