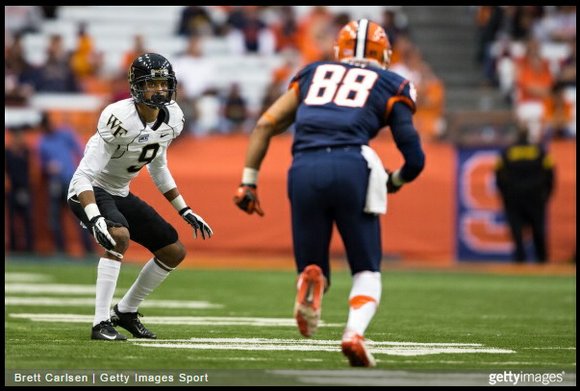 NFL Draft 2015, who will the Baltimore Ravens choose? courtesy of Wake Forest

BALTIMORE — The first round of the 2015 NFL Draft has finally arrived. The Baltimore Ravens hold the 26th pick and have needs at various positions. The recent shortcomings of Missouri outside linebacker Shane Ray could cause him to still be available when the Ravens are on the clock. There have been connections to Ohio State wide receiver Devin Smith. Position coach Bobby Engram was at Smith’s pro day and had him run Ravens routes.

Cornerback is an area of need for the Ravens. There are three corners that have been linked to the Ravens in the first round. Marcus Peters and Kevin Johnson have been to Ravens facilities for a visit. Byron Jones and Jalen Collins have also received some interest as well.

There’s a good chance that Peters is gone by the time the Ravens are on the clock. Kevin Johnson is likely to be on the board when the Ravens pick. If that is the case, he will be the pick. Johnson is a local product out of River Hill High School in Clarkesville. The Ravens can count on him to come in and compete with Lardarius Webb for the starting cornerback position opposite of Jimmy Smith. Johnson also gives the Ravens another option to fill in at the nickel position.

The Ravens get a willing contributor on special teams in Johnson. That is something that head coach John Harbaugh will surely appreciate being as though he was a special teams coordinator when he was with the Philadelphia Eagles. Johnson is one of the more aggressive press corners in this draft class. The Ravens use a lot of man coverage which is an area of strength for Johnson.