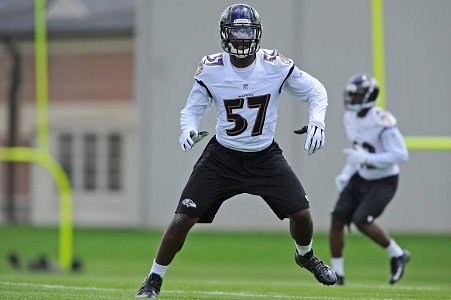 C.J. Mosley had an outstanding rookie season last year with the Baltimore Ravens. He made the Pro Bowl and was in the running for Defensive Rookie of the Year. His 133 total tackles led all rookies and his two interceptions were second only to Chicago Bears corner Kyle Fuller. Mosley was a key part of the Ravens stingy run defense. The rookie was also called upon to matchup with some top tier tight ends in coverage. What’s next for the ascending player?

The second year player has a goal of improving upon what he has already accomplished. “You can never take a step back, so it’s just building from everything I did last year and going up from there.” Mosley said. Looking back is something that can cost a second year player to not put up a comparable follow up season. Ravens head coach John Harbaugh won’t leave any room for complacency and he doesn’t believe it is an issue when it comes to Mosley.

“We’re looking for C.J. [Mosley] to improve. Wherever you set the bar the year before, it’s important to maintain a level head and improve and get better. If you’re getting better every day, you certainly should get better between Year One and Year Two,” Harbaugh said. “I know sometimes guys who have [a] great Year One don’t have [a] great Year Two – don’t follow it up – but that should never be the case. If your head is screwed on the right way, you should have a better Year Two, and I believe C.J.’s head is screwed on the right way.”

One of the biggest obstacles for Mosley was eliminated on Saturday. Mosley took part in the Ravens full contact practice last week after having off season wrist surgery. He said that everything is healing at the right time. The only way that he was protecting his wrist was by wearing a splint. Mosley pointed out how he played six games with the broken wrist last year and said that he feels 100 percent now.

Mosley wanted to pack on some weight during the offseason but said that it was difficult to do so because of the injury. “That was the goal, but I was in a cast for about three months. The good thing [is] I maintained my weight, if anything,” Mosley said. “But like I said, [I was] just working back into it with my wrist and everything as far as staying on the field and lifting weights. I’m going to be smart about it, but I’m definitely trying to maintain weight.”

Younger players tend to do better when there is a veteran on the team that they can lean on for advice. Mosley said that Daryl Smith has shown him a lot. They play the same position and Smith is entering his 12th season in the NFL. The two form one of the NFL’s better inside linebacker duos. Mosley said that Terrell Suggs and Elvis Dumervil have helped him with his pass rushing techniques.

Mosley seems to have the formula for how to stack consecutive high quality seasons in the NFL. “First thing is stay healthy. For the most part, like I said until the last six games, I was healthy and kind of got into a routine of keeping my body right – hot tub, cold tub – making sure everything was taken care of with that part,” Mosley said. “And the other thing is consistency. You don’t want to slack off, and you don’t want to get too complacent with what I did last year, because there’s definitely room for me to grow. So like I said, staying in the playbook, getting tips from guys when I see certain things going on, talking to the coaches if I see anything that I think I need to improve on and get some advice from other players [will be important].”