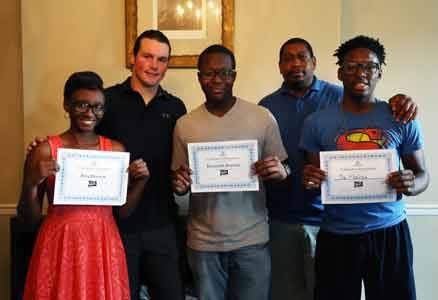 BALTIMORE — To highlight the academic and social accomplishments of local graduates, the Boys and Girls Clubs (BGC) of Metropolitan Baltimore hosted an event to honor nearly two-dozen teenagers. The event was held in the historic Engineers Club at the Garrett-Jacobs Mansion on Mount West Vernon Place in Baltimore City.

The Boys & Girls Clubs of America (BGCA) offers year-round academic success initiatives and has 4,100 clubs across the country to help teens graduate and pursue academic and career endeavors. BGCA provides education-focused programming and resources that aim to help 1.4 million teens graduate high school on time by 2018.

Bria Brown, who was honored at the event, graduated eighth grade from the Knowledge and Success Academy (KASA) in Baltimore City. She initially heard about BGC from classmates. She researched the organization and explained to her mother the reasons why her participation would be important. As a first year participant of BGC of Metropolitan Baltimore, Bria visited her local BGC three days a week and received homework assistance in math. She plans to study marine biology when she graduates college.

Baltimore Orioles outfielder #23 Travis Snider served as the keynote speaker and addressed the teenagers about leadership, commitment and taking initiative.

“These are the most important four years as you enter into your adult life. Luckily, you have these folks [Boys and Girls Club of Baltimore] to lean on,” said Snider. He encouraged them to ask for assistance when they need it. He also shared with them that their level of success depends upon their individual commitment and determination. “There are two things we can control in life, our attitude and our efforts,” said Snider.

Snider is an alumni of the Boys and Girls Club and joined the organization when he was seven years old. He attributes his success to opportunities and being surrounded by coaches and mentors.

“The more opportunities we give these kids and positively influence them, the better they will become. We have a responsibility to take care of the kids and help them to achieve their dreams,” said Snider.

Tre Madison, a senior at Carver Vocational Technical School, appreciates the people who supported him.

“The Boys and Girls Club allowed me to do some constructive and positive things,” said Madison, who plans to attend Stratford University and study culinary arts. “They look to me as a leader to help with the younger kids. Just like people helped me, I want to help them too.”

Kenneth Brown started participating with BGC when he was in the fifth grade. He recently graduated from eighth grade at Westport Academy where he delivered the salutatorian address and highlighted the importance of overcoming challenges and succeeding academically and socially. Brown said he worked hard and received help from his mentor and the applied physics laboratory to enhance his overall grade point average.

“I was really proud of myself for working hard on my math scores,” said Brown, who plans to study software engineering at Baltimore Polytechnic Institute in the fall. “My greatest accomplishment is seeing my mother proud of me. She showed it by her love, affection and just being there for me.”

The program was sponsored by a $30 million grant from the Taco Bell® Foundation and is dedicated to preparing students for college and the workforce. The students were part of the Graduate for Más, which is a program track offered to Club members in partnership with Taco Bell Foundation, as an extension of its national initiative that provides resources to teenagers while tracking their progress toward graduation and life goals.

Through the partnership, the BGC of Metropolitan Baltimore work to prepare local students for a successful transition into high school, higher education and career opportunities.

Melody Locke, principal of Westport Academy, celebrated her 20th year in academia and attended the event to support her former student Kenneth Bonner. She was extremely pleased with the students’ accomplishments.

“Despite the odds they have to overcome, they are hard-working students and I’m really proud of all of them,” said Locke.