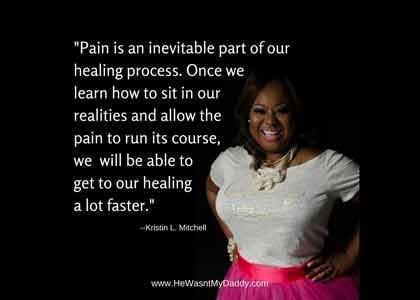 Kristin L. Mitchell, CEO of K. Restoration, LLC is a courageous voice for women who struggle with the aftermath of absentee fathers who have or have not returned into their lives. In her memoir, “He Wasn't My Daddy: My Road to Restoration and Redemption,” she speaks candidly about mental illness, while promoting compassion and understanding. Mitchell's book also explores depression, “fatherlessness,” promiscuity and suicide. (Courtesy Photo)

National Health Interview Survey data from 2007 to 2010 revealed that nearly eight percent of people over the age of 12 reported experiencing depression.

While six percent of males and 10 percent of females reported current depression in the survey, the National Alliance on Mental Illness (NAMI) produced a fact sheet about African American Women and depression. According to NAMI, misdiagnosis and under-treatment is common, and African American women seek help less since depression is often viewed as a personal weakness, instead of a health problem.

Women like Kristin L. Mitchell, a 28-year-old entrepreneur, author and motivational speaker, are playing a role in increasing dialogue about topic. Mitchell says that she is in a good place and feels fine today, but she reminds us that anyone can be touched by depression for a variety of reasons.

However, the unresolved issue of “fatherlessness” partially led to living through abusive relationships, having low self-esteem, attempting suicide and hospitalization in mental wards.

“It wasn’t until that fourth hospital visit that I realized that I had daddy issues that I needed to address. I didn’t realize that because I was so caught up in my relationship with my ex [boyfriend] at the time. I just thought I had a really deep love for him, which I did, but I didn’t realize that that love stemmed from a place of not having that love from anyone else, so I latched on so tight to it because it was a feeling that I longed for. I didn’t realize that I had been void of it for so many years,” Mitchell said. “My father [Keith Mitchell] was incarcerated during the earlier part of my life. He was released from prison when I was about 14— it must have been about 10 years that he was away— so when he did come back home, we still didn’t have a close relationship.”

Kristin recalls certain fun times in her childhood, from birth to around four years old, when she lived with Keith and mother, Erica Dortch-Jones. After Keith returned from prison, Kristin explained that he married and later fathered another daughter with his wife.

“I’d gotten so used to him [my father] not being there, that when he got home [from prison] it wasn’t a big deal for me, because I’d been without him for so long, “Kristin said. “I didn’t realize that I missed his presence, because I hadn’t had it. I lived my life as if I was comfortable without having a father figure because that was my norm.”

After being discharged from a psychiatric ward of a hospital, for the fourth time in 2014, Kristin remarked that she aspired to heal from psychological pain. She wanted to restore balance in her personal life, so she decided to write a memoir called, “He Wasn’t My Daddy: My Road to Restoration and Redemption.”

Her website states that her relationship with her ex-boyfriend was her inspiration for writing the book that helped her to build a platform to tell the story of restoring her inner self through workshops, speaking engagements and book signings. Although Kristin hopes to promote healing for other fatherless daughters and help them to feel unashamed, men read her book, too. Some reportedly regard her journey as an example of how parental absence can affect children.

Kristin added that if daughters who need to resolve issues with their fathers can express how they feel to their fathers, even if interacting does not lead to a close relationship taking that step may prove valuable.

Through her journey, Kristin illustrated how anger, hurt and resentment can be put aside to move forward. Her personal healing entailed recognizing that Keith’s absence early in her life was an issue, and that their relationship was important.