Ravens WR Trent Steelman pursues dream of being in NFL 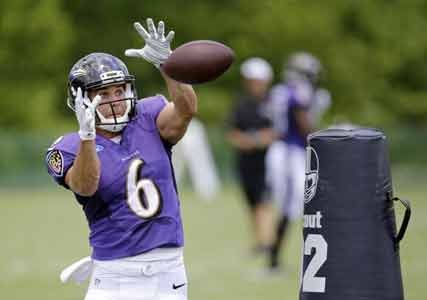 BALTIMORE — “The NFL is my dream. It’s my lifelong goal.” Those are the words former Army quarterback turned wide receiver Trent Steelman utters when asked about being in the league. It has taken an extra year to get to this point and Steelman is now a member of the Baltimore Ravens competing for a spot on the roster. He is making a position change to improve his chances of being in the NFL.

New England Patriots wide receiver Julian Edelman successfully made the same switch, which serves as motivation for Steelman. Coincidentally, Steelman worked out for the Patriots before signing with the Ravens.

Steelman got the opportunity to practice at M&T Bank Stadium in front of 22,111 fans including many military veterans in attendance recently. It was Steelman’s third practice as a Raven and he made the best play of his young training camp.

“It’s humbling to be in this position. It’s a true privilege,” Steelman said. “It’s something that I carried with me in my days as an officer. To see them out there, I know what they have been through.”

The Ravens were interested in signing Steelman after the 2014 NFL Draft but it was not possible because he was required to maintain his five-year commitment to the military. The Ravens and the military were unable to work out a deal that would allow him to play. His dream was right there in his hands but was snatched away. Instead of being in Owings Mills catching passes from Joe Flacco, Steelman was stationed in

Savannah, Georgia serving his military obligation. The missed opportunity was something that Steelman said kept him up at night.

The opportunity presented itself when Steelman received a call from an officer at the Pentagon. It was no secret that Steelman wanted to play in the NFL and had the talent to make it. The officer asked Steelman if he still wanted to pursue his dream and without any hesitation, Steelman answered, “Yes sir!” The next day he got a call and was told that his wish was granted— he was good to go.

Steelman excelled at the wide receiver position at in the International Federation of American Football World Championship. He was named the tournament’s MVP where he posted 18 catches for 258 yards and two touchdowns in four games. He also rushed for 66 rushing yards and had a fumble recovery for a touchdown.

Steelman participated in the first ever NFL Veterans Combine at the Arizona Cardinals practice facility in Glendale, Arizona.

The switch to wide receiver and path to the NFL hasn’t been an easy one for Steelman.

“There have been a lot of times when I wanted to call it quits, it was tough,” Steelman said. “I wouldn’t quit. I had to pursue my dream.”

Each day is an uphill battle for Steelman because he is making a position change at a level of football that is second to none. He knows what he needs to improve upon and it’s a daily operation.

“Technique-wise, I am learning the little things as a receiver. I am working on getting off the ball, not selling my cuts too early, getting in and out of my routes,” Steelman said. “I like my growth and I will continue to work and continue to make it work.”