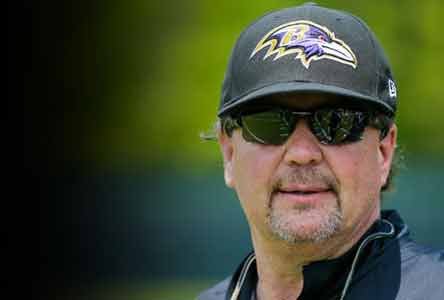 BALTIMORE — John Harbaugh knew exactly what he was getting when he reached out to Marty Mornhinweg after the New York Jets didn’t bring back their 2014 coaching staff. Mornhinweg was the Jets offensive coordinator last season. He has earned a reputation as a top quarterback coach by coaching the likes of Steve Young, Brett Favre and Donovan McNabb. Mornhinweg was a four year starter at the University of Montana and set 15 passing records. He has spent time coaching wide receivers, tight ends and the offensive line.

Harbaugh feels that having a quarterback coach such as Mornhinweg will benefit an experienced player like Joe Flacco. “He’s an excellent teacher of quarterback mechanics. He’s been a coordinator. He understands the west coast offense inside and out,” Harbaugh said; “He’s a really great teacher of quarterback play.” The two coaches have a history together that dates back to their time coaching on the same staff in Philadelphia with the Eagles.

Mornhinweg is able to lean back on his time playing the position to help him. He says that experience counts, especially in the quarterback role. The Ravens are a team that really appealed to Mornhinweg. He was ready to go as soon as he was asked. “When John [Harbaugh] called me, I simply said; ‘When do you want me there.’ From the outside in, this organization is looked upon as one of the very best in the league,” Mornhinweg said; “John and I go way back. This team is in great shape talent wise. It takes a lot of things to be successful. Hard work and preparation as well as the talent part with Joe [Flacco].”

Backup quarterback Matt Schaub has played for a few quarterback coaches but said that the constant focus on fundamentals is what stands out to him about Mornhinweg. “You go through training camp so often and sometimes lose sight of some of the basics…footwork, timing and certain things that help you be more accurate,” Schaub said. “I think he really hammers that home in our fundamentals and individual drills. He is constantly harping on the little things that you forget about and it has really helped us.”

Having veterans like Joe Flacco and Matt Schaub along with Mornhinweg gives the Raves a very experienced quarterback room. That along with Marc Trestman should bode well for the Ravens as they transition into a new scheme this season.