Back packs, pony rides at Back to School Extravaganza 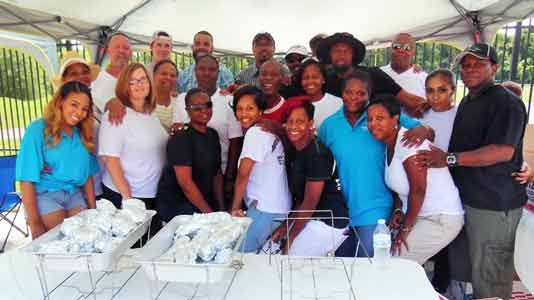 The Boys & Girls Clubs of Annapolis & Anne Arundel County (BGCAA) partnered with Moon’s Barbershop to host a free Back To School Extravaganza on Aug. 9, 2015. The combined team, volunteers and financial contributors helped to ensure that community youth were prepared to start the upcoming school year with book bags and school supplies. (Photo: Andrea Blackstone)

ANNAPOLIS — In many households, back-to-school preparation will soon be in full swing. On Sunday, August 9, 2015, Annapolis area youth began preparing for the upcoming school year, while enjoying festivities on a sunny Sunday. Stacks of book bags were distributed to students at a free Back To School Extravaganza held in the parking lot of the Boys & Girls Club, located at Wiley H. Bates Heritage Park. The addition of free pony rides, snowballs, games, face painting, a bounce house, music and free food created a festival-like atmosphere. The Boys & Girls Clubs of Annapolis & Anne Arundel County (BGCAA) collaborated to co-host the successful effort with Moon’s Barbershop, which is located at 904 West Street. Moon’s Barbershop won the 2011 and 2012 Steve Harvey Neighborhood Award for best barbershop in America. 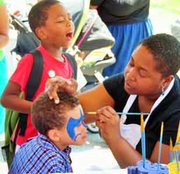 “We are thrilled to be partnering with Moon's Barbershop to ensure that all young people have backpacks and schools supplies for the fall semester. We strive to do all we can for local youth and are grateful to Moon's Barbershop for helping to bring the Back To School Extravaganza to the Boys & Girls Club at Bates, and for opening it up to the entire community,” Steven Cornette, CEO of BGCAA said.

BGCAA’s reach includes youth ages six to 18 who cannot afford, or may lack access to other community programs. Edward Moon, owner of Moon’s Barbershop, is known for giving great haircuts and volunteering along with fellow barbers, family and friends called “Team Moon.” Five years ago, Moon and Melvin L. Brown co-founded an annual back-to-school backpack and school supply giveaway. Moon’s wife, Colleen Moon and Brown’s wife, Crystal Johnson Brown have both involved since the inception of the project.

Before the Back To School Extravaganza, Edward remarked that his goal was to reach 500 students who need school supplies and backpacks. However, it was estimated that over 1,000 book bags were distributed, and 1,250 youth and families attended the first-time event.

“When I was raised…in N.Y., and we went to the barbershop, that was the place that you could always get your advice or get a couple of dollars. The older guys, they had the wisdom and the understanding. They were always giving back to the community…,” Edward said, reflecting on his foundation of giving back to others.

Edward’s close friend, Robert Hector, III has volunteered to assist with the backpack and school supply giveaways for five years. He works at William Reese & Sons Mortuary in Annapolis. He represented the business, during this year’s Back To School Extravaganza, while providing hands-on assistance. William Reese & Sons Mortuary reportedly contributed monetary support to help students begin the school year on a positive note.

The benefit of uniting for a good cause trickled down to help grandparents who wanted to ensure that their grandchildren were prepared for school. Additionally, parents like Laya Baker, who is a mother of three children, received flyers notifying them about the event. After receiving book bags and school supplies, the Baker children enjoyed jumping in a bounce house as their mother stood nearby.

The event also offered fellowship. Classmates, volunteers, relatives, neighbors and old friends of all ages conversed while enjoying food and activities. Taryn Parker, 7, and her brother, Jayden Parker, 9, rode ponies as their parents—Scott and Lauren Parker—waited for them. Scott was born and raised in Annapolis. He attended school with Colleen Moon. He explained that his primary purpose for attending the Back To School Extravaganza with his family was to support it.

“It’s a beautiful thing, just to see the smiles on the kids’ faces,” Parker said, with an observant eye. “Moon’s Barbershop, they do something for the community all of the time.”