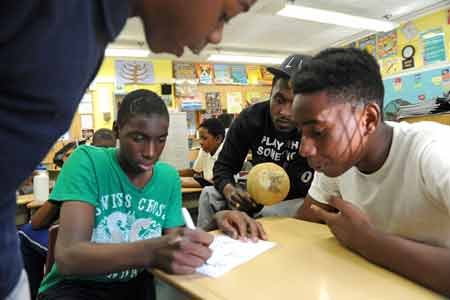 Youth from Safe Alternative Foundation for Education's 2015 football program work on an activity about distraction with Van Brooks, rear, during a classroom session. (Courtesy photo)

BALTIMORE — A safe haven where youth can learn during the summertime, on weekends and after school will open its doors during a grand opening on Saturday, August 15, 2015. 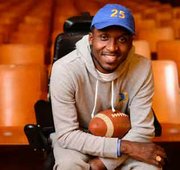 A youth center called the SAFE Center, founded by Van Brooks opens in the Franklin Square community of West Baltimore City. A block party and grand opening will be held from 1- 4 p.m. on Aug. 15, 2015 at 1501 Lexington St. in Baltimore, Md.

Van Brooks, 27, founded Safe Alternative Foundation for Education (S.A.F.E). Through outreach and speaking engagements, Brooks shares the importance of obtaining an education and having an alternate career plan in life, in the event that a first plan is altered as his was when his athletic career was cut short by a devastating injury.

SAFE Center, located at 1501 W. Lexington St. in Baltimore, will allow the foundation to further its mission. Focus areas will include science, technology, engineering, art, math (S.T.E.A.M), literacy, health and fitness. Brooks anticipates he will operate the SAFE Center with the assistance of volunteers for the first six months. After enough funding becomes available, Brooks says that a few of SAFE’S current volunteers will be hired.

Youth will be invited to visit the SAFE Center beginning Tuesday, August 18, 2015, although formal programs are not scheduled to begin until mid-September.

“The first couple of weeks is just for the kids to come and go, and kind of get to know us, to know we are there, to know what we offer, and it’s a way for us to get to know the kids as well. Before we start programs, we’re going to bring in potential partners to present their programs that they offer to the kids, and then the kids will then decide whether or not if that’s something they would want to have at the center,” Brooks said.

The Baltimorean grew up in the community where the center is located. He recalls using facilities and participating in free activities, which Brooks says gradually disappeared over the years.

“We’ll actually be one of the only facilities in the area offering the things that we are going to offer for free,” Brooks said.

Brooks’ primary goal was to become a professional athlete, until he was paralyzed as a teenager in 2004. He broke his neck while attempting to make a football tackle. The former athlete was led to start his foundation, and launch the SAFE Center, which will focus on offering programs for middle school students.

“Everything I went through inspired the foundation and the center,” Brooks said. “In 2012, eight years after my injury, I was able to take my first steps on my own. A couple of days after that, I woke up from a dream that said, ‘Hey, start this foundation.’ So that was a direct result of my paralysis. The mission comes from what I went through after my paralysis. I was 16 years old, so I was still a kid, and still had my life ahead of me. All I did was focus on athletics, and I didn’t focus on my education. When my athletic ability was taken away from me, the only thing I had to fall back on was my education.”

As a result of his personal experience, Brooks now promotes the message of youth having a back-up career plan. Today, the Towson University alumnus is fully independent. Brooks credits an incredible support system with helping him to navigate through life after paralysis.

“My way of trying to repay them back is to give those in need the support that I received,” Brooks said.

Sakina Stamper, 29, is a senior attending the University of Baltimore. She also wants to pay it forward. The business administration major specializing in entrepreneurship is Brooks’ intern. Stamper, who grew up in Baltimore City, said that she always wanted to be a part of a nonprofit and wants to start her own someday. Stamper has been helping Brooks to prepare for SAFE Center’s grand opening, which will include a block party, back-to-school giveaway, prizes and other activities.

“I feel really, really great about giving back and helping people. It’s something that I’ve always done on my own,” Stamper said. “This capacity that I’m doing it now, it just feels so great because this is all for the children, and letting them know that they are not alone, and that we are doing our best to change the direction that the world is going in.”