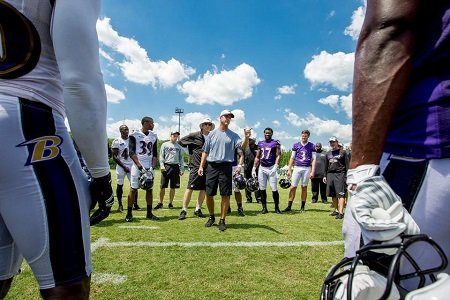 Ravens head coach John Harbaugh talks to the team after a training camp practice at the Under Armour Performance Center in Owings Mills, Maryaland. (Photo: www.baltimoreravens.com)

BALTIMORE — The Baltimore Ravens will take a ride up 95 North on Tuesday and get ready to kickoff joint practices with the Philadelphia Eagles on Wednesday, Thursday and Friday. The joint practices will benefit both teams. Head coach Chip Kelly and the Eagles are known for practicing at a lightning fast pace. John Harbaugh and the Ravens are known for their intense practices.

The Ravens are well aware of the tempo that the Eagles use on offense and they are up to the task. Defensive end Chris Canty said that they will be ready to keep pace. “It’s hard to believe anybody practices faster than us,” Canty said. “Whatever we’re faced with, we’ll deal with it. That’s the kind of football team we are. Whatever the pace is, the pace is. We’ll adjust to it and play football.”

The idea of joint practices isn’t anything new to the Ravens. They held joint practices with the San Francisco 49ers last year. Offensive coordinator Marc Trestman said that he has taken part in a few over the years as well. The joint practices allow the players a break from having to bang with their teammates. They get to go against someone with a different logo on their helmet.

Trestman drove this point home during a recent post practice presser. “I think anytime we can go against others in a cooperative manner to get work done and to get better, I think it always helps,” Trestman said. “I think it’s better for both sides and for the individuals on the competition side, because we’re not seeing our own players all the time.”

Ravens defensive coordinator Dean Pees also sees tremendous value in practicing against another team. “I think we’ll get a lot out of it. It’s a really good changeup, plus the fact we’re practicing against a really good football team.” Pees said. ““The good thing about it is, is it’s actually just not hitting each other for a change. That’s the biggest thing – it’s just pounding, pounding, pounding always on each other. . The other thing is it’s just really good to see somebody else’s scheme and practice against it.”

There are times when scuffles can result from teams going at it in the scorching heat during joint practices. Players tend to have an extra edge when they are going against a different team. It takes discipline to not allow any fights to break out. Defensive tackle Brandon Williams said that the Ravens will take care of each other and do what they have to do to get better as a team. “When the whistles blow, we’ll stop. We’re going in there thinking we’re going to have a hard practice and we’re going to do what we’re coached to do. And that’s all we’re going to take it to.”

The reps will be live and practice will be turned up when the two teams face each other. It gives coaches an opportunity to evaluate their players in game like situations. The Ravens week in Philadelphia will be capped off with the second preseason game for both teams as they face off at Lincoln Financial Field on Saturday.