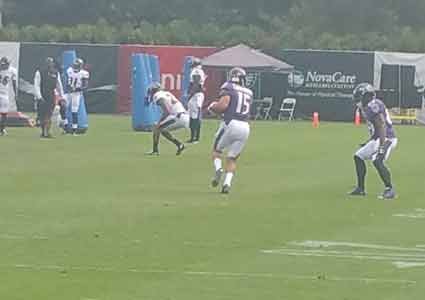 Ravens WR Michael Campanaro good through drills at the start of practice at the NovaCare complex in Philadelphia, PA (Photo: Turron Davenport)

Wide receiver is a position that the Baltimore Ravens have tried to address via free agency and the draft over the last couple of years. One of their 2014 draft picks was Michael Campanaro. If he can remain healthy, he is a player that can have an impact for the team. The Ravens and Philadelphia Eagles took part in joint practices on Wednesday and Campanaro was a standout.

The shifty receiver was able to get open and make plays in tight spaces against the Eagles defensive backs during a red zone drill. Campanaro used his quickness to beat Eagles rookie defensive back Eric Rowe at the line and got open quickly on jerk routes. Joe Flacco found him in the end zone for a touchdown twice in 7 on 7 red zone periods. Campanaro also got open on a deep crossing route from the slot position. It was the same play that he scored a touchdown on in the preseason game against the New Orleans Saints last week.

Head coach John Harbaugh had plenty of praise for Campanaro after practice. “Campanaro plays outside, but he should be really good in the slot for us. You look at those guys who have played that position that look like him a little bit – he’s like that,” Campanaro said. “He can get away from coverage. He’s quick. He has a good feel for where the pressure is coming from. He can get off the line of scrimmage. He’s coming on right now. We just have to keep going.”

Going against the Eagles defensive backs is a welcome change for Campanaro and the Ravens receivers. They welcome the opportunity to measure themselves against a new opponent who doesn’t know their tendencies. Campanaro touched on that after practice. “You go against the same guys for weeks straight, they pick up on your moves, the little things you do. Going against a new opponent, you get to try things you’ve been working on in practice,” Campanaro said. “It’s great to go against a different opponent to see different techniques and see how guys play. You see how they play different coverages and you get to just work your craft.”

The second year receiver has battled injuries in the past but he has taken up yoga to help with flexibility. Campanaro is one of those quick twitch players that can change direction in a hurry. This kind of movement puts stress on the hamstrings and quadriceps. Campanaro has worked to find a better balance in his body to prepare his legs for the torque that go through during the season.

The Ravens put their players through long, intense practices. That’s something that didn’t go unnoticed by Campanaro. “We practice hard and we practice long. Anytime you can come into camp and practice at a high level weeks into camp, you feel like your body is in good shape and ready to go.”

Wednesday’s practice was around 40 minutes shorter than the typical Ravens practice. It wasn’t the fast paced practice that the Eagles normally employ. Never the less, it was a productive day for the Ravens passing game, especially Campanaro.